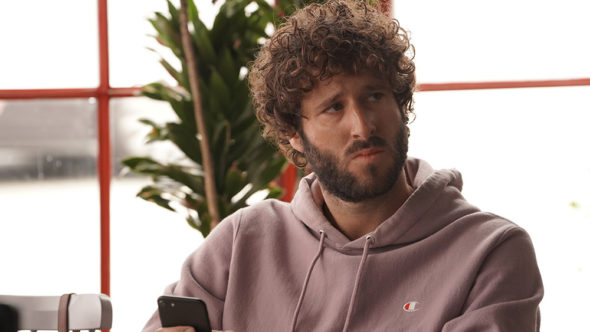 Will Dave’s friends help or hinder his pursuit of fame and fortune? Has the Dave TV show been cancelled or renewed for a second season on FXX? The television vulture is watching all the latest cancellation and renewal news, so this page is the place to track the status of Dave, season two. Bookmark it, or subscribe for the latest updates. Remember, the television vulture is watching your shows. Are you?

Airing on the FXX cable channel, the Dave TV show stars Dave Burd, Taylor Misiak, Andrew Santino, GaTa, Travis Bennett, and Christine Ko. A single-camera comedy series, it’s based on the life of Burd, a rapper and comedian who’s known as Lil Dicky on stage. The show is created by Burd and Jeff Schafer. The series revolves around a suburban neurotic man named Dave (Burd). He’s in his late twenties and has convinced himself that he’s destined to be one of the best rappers of all time. Now, he must convince his friends and the rest of the world. Those around Dave include Elz (Bennett), an audio engineer, and Dave’s childhood friend; Dave’s regularly employed roommate, Mike (Santino); GaTa (GaTa), Dave’s on-stage hype man; and Ally (Misiak), a school teacher and Dave’s long-term girlfriend.

The first season of Dave averaged a 0.11 rating in the 18-49 demographic and 213,000 viewers. Find out how Dave stacks up against other FXX TV shows.

Will FXX cancel or renew Dave for season two? The show seems relatively inexpensive to produce and Disney is stocking up on shows for FX and FXX, which then are added to the Hulu library. Based on that, I think this show will be renewed. I’ll update this page with breaking developments. Subscribe for free alerts on Dave cancellation or renewal news.

What do you think? Are you glad the Dave TV show has been renewed for a second season? How would you feel if FXX had cancelled this TV series, instead?

I enjoy this show very much. The humor and satire in this series is a great release for everyday reality. I especially am fascinated with his free style. I realize that rappers practice their material, but to be able to throw in some on the spot catchy puns and rhyming is very clever and admirable. I will be DEVASTATED if this show does not continue. Please continue.

This show must go on!