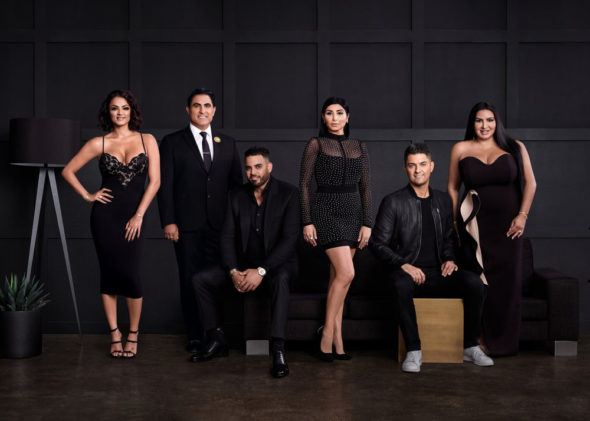 “Coming up this season:

With the dust finally settling after last year’s devastating fallout, Reza finds himself feeling ready to dip his toe in the water of reconciliation with his best friend of over 30 years, MJ. And while his relationship with husband Adam is stronger than ever, his friendship with his “brother” Mike is called into question when rumors about Mike’s bad-boy behavior start to swirl.

After a challenging year for MJ, she finds herself in yet another difficult situation trying to make amends with Reza who still has a restraining order against her husband, Tommy. Despite this, the two vow to begin the journey towards forgiveness in hopes of healing their friendship and bringing everyone back together again.

Mike and his girlfriend Paulina’s “perfect” relationship is put to the test when cracks in their union are revealed to the group. Landing himself in the hot seat, Mike ignites another scandal that both tests his own bond with Reza and threatens to break up Reza and GG’s newly reformed friendship.

After a long and difficult journey to motherhood, GG is thrilled to introduce her beautiful son Elijah to the world. She proves to be an unexpected unifier and voice of reason among her friends, helping them communicate their hurt feelings and hopefully let go of past grievances. The true test comes when she must apply this new perspective to her own friendship with MJ.

Destiney moves out of her high-rise apartment and into an adorable house across the street from a very familiar face. Still reeling from the chaos of last year, she works to find peace with MJ as she strengthens her bonds with Reza and GG. When Paulina confides in Destiney about relationship issues with Mike, she finds herself entangled in yet another conflict.

After Nema’s business ventures were hit hard by the pandemic, he faces a crossroad when he is forced to make some difficult decisions. While his relationships with MJ and Mike remain stronger than ever, Nema navigates an uphill battle to repair his friendships with Reza, Destiney and GG in the hopes of bringing his “family” back together.

MJ’s new Persian friend London is a welcome breath of fresh air. As a life coach, London has the unique ability to help her newfound friends through difficult situations. When her strategies begin to wear thin, however, London is put to the ultimate test on a group trip where she needs to do more than dole out pep talks if she wants to keep up with the rambunctious crew.”

Shahs of Sunset will return to Bravo on May 16th.

What do you think? Are you a fan of Shahs of Sunset? Do you plan to watch season nine on Bravo?