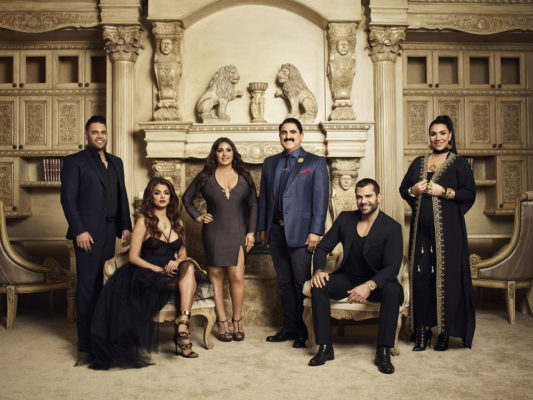 Do you watch Shahs of Sunset? Bravo just announced the TV show’s seventh season will premiere this August.

The new season of the reality show will see the group “confront deep-rooted issues – both within themselves and amongst the group – in order to lift each other up and take the next steps toward their future.”

Season seven of Shahs of Sunset premieres on Bravo on August 2nd at 9 p.m. ET/PT.

NEW YORK – June 18, 2018 – Bravo Media gets turned up when “Shahs of Sunset” returns for an epic seventh season beginning Thursday, August 2 at 9pm ET/PT. Though feisty best friends Golnesa “GG” Gharachedaghi, Mercedes “MJ” Javid, Mike Shouhed, and Reza Farahan have gone through just about everything together, the adventure is only just beginning as they each embark on the newest chapter in their lives. Familiar face Destiney Rose is back and when Mike introduces Branding Executive Nema Vand to the crew, the self-professed “white-washed Persian” wastes no time shaking things up. Still reeling from last year’s pitfalls, these tight-knit Shahs must confront deep-rooted issues – both within themselves and amongst the group – in order to lift each other up and take the next steps toward their future.

This season, MJ is poised to marry her Prince Charming Tommy in true Shahs fashion, but her pre-wedding glow is dulled when her opinionated mother Vida gets involved and her father’s health begins to rapidly decline. When MJ finds herself plagued by indecision and self-doubt, the whole crew must come together to keep her steady and help get her down the aisle. Well into the second year of wedded bliss, Reza and his husband Adam are in the process of renovating their brand new house and settling down, but tensions build when one of Reza’s investments interferes with Adam’s surrogacy plans. Mike, ever the alpha-male with unrealistically high expectations, is determined to find the next Mrs. Shouhed, but does not take well to bestie Reza’s input on his dating choices, leading to a heated standoff during MJ’s bachelorette party in Vegas. Destiney is eager to dip her toes into the dating pool, but realizes she must confront her own trust issues first. In an attempt to find peace, she hires a private detective to track down her absentee father, but what she finds leaves her questioning whether she can handle the truth.

After a recent failed marriage, GG is on a quest for independence, but rethinks her decision to remain single and try for a baby on her own when newcomer Nema showers her with attention. Joining this audacious crew is never easy, but Nema manages to hold his own and quickly finds himself in a complicated love triangle. Looking to get to the root of his ongoing relationship struggles as an adult, the group bands together to help Nema gain the confidence to confront his unconventional family about his broken upbringing.

Tonight, Monday, June 18 at 8pm ET/PT, tune in to the half-hour special “Shahs of Sunset: How They Got Here” to revisit highlights from the past six seasons with best friends Reza, MJ, GG, Mike, Asa, and newcomer Destiney. Get a refresher on the series’ juiciest moments – from Reza’s on-again, off-again marriage, to MJ’s quest for love, GG’s anger issues, and more – as the gang travels the world while navigating their loyalties, romances, and above all, their friendship.

What do you think? Have you seen Shahs of Sunset? Will you watch the new season?