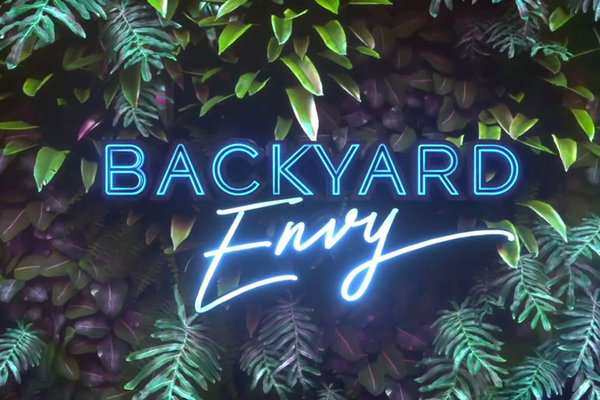 Get ready for new episodes of Backyard Envy. The series is returning for a third season this summer, and fans of the series will see James DeSantis, Garrett Magee, and Melissa Brasier back in action.

Bravo revealed more about the return of this series with a press release. Check that out below.

“James, Garrett and Mel – the Manscapers – are back, and business is blooming! They’ve expanded the clientele of their boutique landscaping company, and have more projects than they can handle.

This season, these creative minds take on some of their biggest jobs to date as they produce a Tuscan-themed backyard in the middle of New Jersey, design a Japanese garden for an ultra-modern home, conquer a logistically challenging “upside-down house” on Fire Island, and reimagine a larger-than-life World Pride Parade float for a hotel giant.

On top of it all, James, Garrett and Mel get to the root of their complicated work relationship when James addresses his growing frustration with the direction of the company.

Mel faces a serious health scare that could potentially change her life forever.

The Manscapers will confront business challenges, differences of opinion, staff issues and even a surprise proposal. As this dynamic trio takes over one garden at a time, will their business eventually reach the end of the path?”

Backyard Envy will return on August 4. Check out the preview for the new season below.

I’m Beyond excited about this show!!! Thank god it’s coming back for another season! Can’t wait!!

Love this show. Love to watch them create and teach us at the same time. Looking forward to 2nd season.

Yes a fan. You need more fashion, decorating and food shows — otherwise I wouldn’t watch BRAVO as REALLY not a housewives fan

yes I would watch it. You need more design and fashion shows–not a housewife fan!!!!!!!

Yes i will watch this show again this coming season. I found it to be very interesting and educational. Plus it’s very interesting to see how they come up with these ideas. All around a very entertaining show.