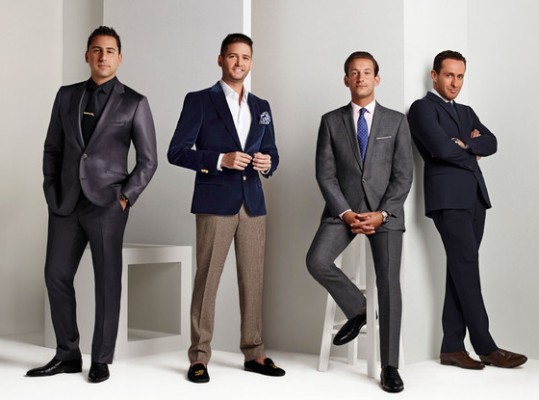 NEW YORK – November 30, 2018 – Bravo Media’s favorite LA agents return for season eleven of “Million Dollar Listing Los Angeles” premiering Thursday, January 3 from 9 – 10:15 PM ET/PT. Powerhouse agents Josh Flagg, Josh Altman, Tracy Tutor, James Harris and David Parnes continue to navigate huge deals, huge homes and huge egos in one of the hottest real estate markets in the world. From listing the estate of NFL star Antonio Pierce to selling a home to Grammy Award-winning superstar Kelly Rowland, the agents are pulling out all the stops to close the biggest deals of their careers with some of the biggest names in the business.

Adjusting to life as a new dad, Josh Altman is going through a lot of change but when it comes to growing his real estate empire he is still a shark. This season, Altman scores hot listings including the home of NFL star Antonio Pierce. As Josh Flagg settles into his first year of married life, he is laser-focused on his business with the help of his husband Bobby and trusted assistant Hilary. However, when Josh turns from agent to buyer, he and Bobby might be the most challenging clients yet. After having the best year of their careers Brits, James Harris and David Parnes have become major competition to the other agents. The dynamic duo creates a deal to purchase the infamous Playboy “Bunny Ranch” and the iconic house where “Mommie Dearest” was filmed, all the while working on deals with celebrity clients including Kelly Rowland and Dorit Kemsley from “The Real Housewives of Beverly Hills.” Tracy Tutor embarks on a new chapter of her life, as she juggles the new normal of being a single working mom, but she has not lost sight of her professional dreams. Taking her business to the next level, Tracy works to sell Rose McGowan’s house and travels to Dubai to visit Caroline Stanbury and becomes the LA rep for an ultra-luxury high rise there. With inventory scarce and competition fierce, this season the agents go to surprising lengths to stay on top.

What do you think? Are you a fan of Million Dollar Listing Los Angeles? Are you excited for the new season?

Yes like it is it off the air because of fires