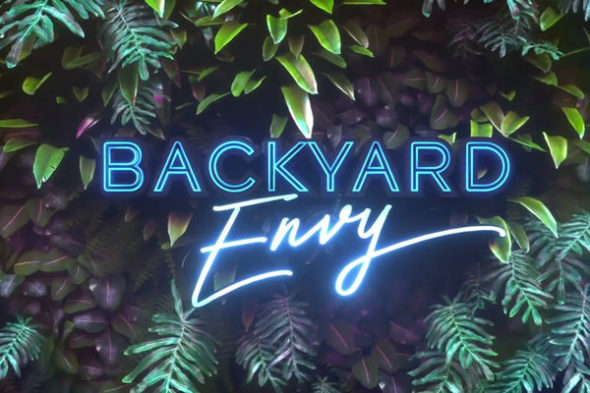 Bravo is whipping up a different kind of milkshake. The cable network has ordered the Backyard Envy TV show to series. The program was originally announced back in April of 2018, but now that working title is official. The first season of Backyard Envy premieres on Bravo on Thursday, January 17, 2019 at 10:00pm ET/PT.

NEW YORK – December 3, 2018 – Bravo Media will give viewers a glimpse into elite rooftops, terraces and private exterior oases in the new original series, “Backyard Envy,” premiering Thursday, January 17 at 10:00 pm ET/PT. James DeSantis, Garrett Magee and Melissa Brasier make-up the exclusive exterior design and high-end landscaping firm, the Manscapers, and viewers will go along for the ride as this set of best friends and business partners reimagine outdoor spaces and help their clients turn the ordinary into the extraordinary.

In every episode James, Garrett and Melissa will hatch a plan to do a full outdoor renovation design from city rooftops to backyards in the suburbs and beyond. This crew is put to the test as they juggle tight deadlines, multiple clients and each other as they transform barren outdoor spaces into lush, jaw-dropping escapes. In the premiere episode, James sets the team up with a job in the suburbs, but problems arise when Mel and the construction team strike water while building a stone patio. Meanwhile, Garrett creates a beach inspired rooftop meadow for a couple, but things get hot while adding some extra flare to the project.

James DeSantis grew up in upstate New York in a close-knit lakeside community. He knew that there was more to life beyond his small town, and with his larger than life ideas he embarked on a journey to New York City. James studied and attended design school to learn how to bring all his fabulous visions to fruition. Using his innate talents from his designer parents, James honed his blanket throwing and pillow chopping skills and learned to truly express himself. While attending the Fashion Institute of Technology, James met his future business partner Melissa, where they partnered together and learned everything about the design world, concluding that there was more to it than simply interiors. James hustled hard in New York and earned a job with internationally acclaimed retailer Ralph Lauren. While traveling the world he later returned to his home base to create Manscapers with his best friends Melissa and Garrett. James wears many hats, as an interior and home designer, registered yoga instructor and top rate schmoozer. He brings his eclectic upbringing, world travels and over the top personality into all aspects of the business.

Garrett Magee
Garrett Magee was born in Texas and raised in Tennessee. At an early age Garrett knew he had a creative eye, and has been a nature lover from his first memories growing up in the beautiful wooded South. Garrett attended the Art Institute of Chicago to study graphic design and fine arts. After working in corporate design for many years Garrett grew frustrated with always working in front of a computer and decided to broaden his horizons, and go back to his roots. He began attending classes at the New York Botanical Gardens for landscape design to tap into his calling as a true “plant whisperer”. It was there that he honed his craft in exterior design and co-founded Manscapers, which grew into an exclusive exterior design and high-end landscaping firm. Garrett currently resides in New York and enjoys traveling the world, photo-documenting his life, lending his green thumb, and spending time with his triplet-nieces.

Originally hailing from the city of lights, Las Vegas, Melissa Brasier began her career as a modern dancer who studied and toured with Alvin Ailey. Melissa knew she needed a change from movement and dance and ventured on to major in Interior Design at the internationally recognized Fashion Institute of Technology. After graduating Melissa worked for elite clients in commercial construction and interior design. Fiercely driven in the design field for over a decade, Melissa took a leap to co-found Manscapers with her two best friends and partners, where she truly puts the WOMAN in Manscapers as the construction lead. Melissa loves gardening, flea market shopping, home renovations, dancing and teaching yoga in her free time. She currently resides in Brooklyn and is the proud mother of two daughters. Melissa’s endless creativity always keeps her motivated.

Bravo Media is the premier lifestyle and entertainment brand that drives cultural conversation around its high-quality, interactive original content across all platforms. The network has a diverse slate of original programming that includes anthology series “Dirty John,” along with unscripted favorites such as Emmy Award-winning “Top Chef,” “Vanderpump Rules,” “Below Deck,” “Southern Charm,” and the popular “Million Dollar Listing” and “The Real Housewives” franchises. Bravo also boasts the only live late-night talk show on television with the critically acclaimed “Watch What Happens Live with Andy Cohen,” which has become a nightly destination for A-list celebrities. Available in 87 million homes, Bravo is a program service of NBCUniversal Cable Entertainment, a division of NBCUniversal, one of the world’s leading media and entertainment companies in the development, production, and marketing of entertainment, news, and information to a global audience. Watch Bravo anywhere: on demand, online, or across mobile and connected TVs. Bravo has been an NBCUniversal cable network since December 2002 and first launched in December 1980.

What do you think? Do you like the sound of the Backyard Envy TV show? Do you plan to check out the series premiere on Bravo? Tell us.

Please bring ..Backyard Envy.. back on Bravo …I miss it! They were talented, funny and good looking, everything you want on a show.

This is a great Show! Bravo do not cancel this show!

This is a great show! It’s better than all those other husband and wife garden home rehab shows on HGTV and DIY. I got a lot of ideas this past spring from the show
that I incorporated onto my property just in time for summer. Please do not cancel this show!

Everything about this show is incredible – their friendship, the gay bitchiness, hilarious commentary, gorgeous NY backdrop, the designs, and the information on everything they use to landscape. PLEASE renew this show!!!

I think it’s an awesome show.. I wish you could do my backyard so my mom would be able to enjoy my backyard… I don’t know what to do with it.. I’m in California my backyard is small and I’d like to do something for my mom since her and my father have always been there for my kids and myself.

I absolutely love this new show Backyard Envy. I make sure I watch every episode. I DVR it. I love plants and learn so much from Garrett. These 3 individuals are so interesting they get along and really work together as a team. Please keep taping this show do not cancel. I am from upstate NY. I plan on going to NYC some time.
I want to see Gitano’s pop-up restaurant and all those palm trees. in the summer . My new favorite Bravo show!!!!!

Come to California!!! We have the perfect backyard for you!!!!!!!! It has a view of the world but needs your help! I’m a cancer survivor and you choosing us would be a dream come true. Thank you!!

Please come to Atlanta!! I need you!!! My curb appeal and backyard are a -12.

Live in I’ll, two time cancer survivor, dream of living in Hawaii , will never happen, would love a tropical back yard, but I live in Illinois , snow winters , what magic can you do. Take this challenge

I am 68, single and just bought home in Billings, MT. Oh, the backyard is horrendous. It’s a great sledding hill. But I am too old to do that. Please help me