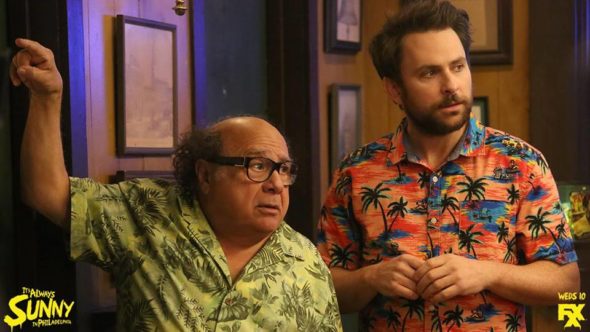 Would you want friends like these?  Has the It’s Always Sunny in Philadelphia TV show been cancelled or renewed for a 15th season on FXX? The television vulture is watching all the latest cancellation and renewal news, so this page is the place to track the status of It’s Always Sunny in Philadelphia season 15. Bookmark it, or subscribe for the latest updates. Remember, the television vulture is watching your shows. Are you?

The 14th season of It’s Always Sunny averaged a 0.16 rating in the 18-49 demographic and 299,000 viewers. Compared to the 13th season, that’s down by 26% in the demo and down by 18% in viewership. Find out how It’s Always Sunny in Philadelphia stacks up against other FXX TV shows.

5/27/20 update: It’s Always Sunny in Philadelphia has been renewed.

What do you think? Are you glad that the It’s Always Sunny in Philadelphia TV show has been renewed for a 15th season? How would you feel if FXX had cancelled this TV series, instead?

Is there an update on this?

Season 13 was a disaster. Season 14 continues in the same terrible direction. These last couple of seasons have lost the originality and charm the show is known for. Wit and comedy has been replaced by political correctness and the incessant need to shove the new world order agenda down everyone’s throats. It doesn’t surprise me though. Hollywood is full of nut job pedophiles and narcissists. Don’t waste your time on this season. I suggest sticking to the old episodes, when the show was actually funny; when the characters were believable instead of caricatures of themselves that would fit better… Read more »

I disagree, I think Seasons 11, 12, 13, and 14 are literally the funniest seasons of the whole series, It’s Always Sunny in Philadelphia is always funny and just keeps getting better and better! Hopefully they will break the record for the longest running comedy and renew it for Season 15 (and beyond)!

I don’t agree I love Them all!