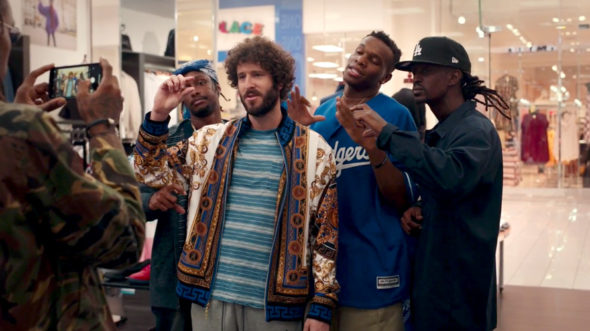 Will Dave reach his dream the first season of the Dave TV show on FXX? As we all know, the Nielsen ratings typically play a big role in determining whether a TV show like Dave is cancelled or renewed for season two. Unfortunately, most of us do not live in Nielsen households. Because many viewers feel frustration when their viewing habits and opinions aren’t considered, we invite you to rate all of the first season episodes of Dave here. *Status update below.

An FXX single-camera comedy series, the Dave TV show stars Dave Burd, Taylor Misiak, Andrew Santino, GaTa, Travis Bennett, and Christine Ko. It is based on the life of Burd, a rapper and comedian who’s known as Lil Dicky on stage. The show is co-created by Jeff Schafer. The series revolves around a suburban neurotic man named Dave (Burd). He’s in his late twenties and has convinced himself that he’s destined to be one of the best rappers of all time. Now, he must convince his friends and the rest of the world. Those around Dave include Elz (Bennett), an audio engineer and Dave’s childhood friend; Dave’s regularly employed roommate, Mike (Santino); GaTa (GaTa), Dave’s on-stage hype man; and Ally (Misiak), a school teacher and Dave’s long-term girlfriend.

What do you think? Which season one episodes of the Dave TV series do you rate as wonderful, terrible, or somewhere between? Do you think that Dave should be cancelled or renewed for a second season on FXX? Don’t forget to vote, and share your thoughts, below.

I really hope they keep making episodes of Dave. It’s funny n I like learning how he got his start. I love all the characters..especially GaTa

Please make more seasons of Dave! Lil Dicky is hilarious and the show is amazing