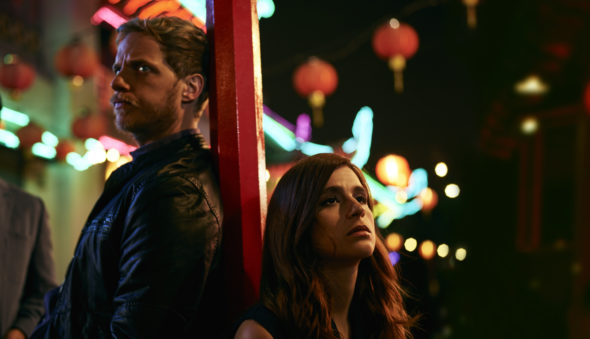 FXX has renewed its You’re the Worst TV show for a fifth and final season, leaving the show effectively cancelled. According to the FXX press release (below), creator and showrunner Stephen Falk and FX Networks arrived at the decision to end the show, together. The season finale airs tonight on FXX, and eason five of You’re the Worst should air in 2018.

An FXX comedy, You’re the Worst stars Chris Geere, Aya Cash, Desmin Borges, and Kether Donohue. The story centers on Jimmy Shive-Overly (Geere) and Gretchen Cutler (Cash), who met at another couple’s wedding. The series explores modern love and happiness through their eyes, as neither of them have had much success in either arena.

You’re the Worst: A Look at the Ratings

The fourth season of You’re the Worst is averaging a 0.11 rating in the 18-49 demographic and 234,000 viewers. Compared to season three, that’s up by 9% and up 7%, respectively. Despite the increase earns the lowest demo ratings of the FXX TV shows we’re currently tracking. In terms of audience size, it ranks just above the already cancelled Man Seeking Woman.

Check out the FXX press release for further information.

You’re the Worst Renewed For Fifth and Final Season

LOS ANGELES, November 15, 2017 – You’re the Worst, the critically-acclaimed comedy series from creator and showrunner Stephen Falk, has been renewed for a fifth and final season, it was announced today by Nick Grad and Eric Schrier, Presidents of Original Programming, FX Networks and FX Productions. Falk and FX Networks jointly decided to make the fifth season, which will air on FXX in 2018, the series’ finale.

“Stephen Falk has been an extraordinary creative partner to work with over the past four years, and it is in that spirit that we came to the mutual decision to end You’re the Worst with its fifth season,” said Grad. “Stephen’s singular vision for the series has been its guiding force from the start and our decision, while difficult, will allow the series to end on its own terms and in a way most satisfying to its devoted fans. We want to thank Stephen, the cast and the crew for everything they’ve done to make You’re the Worst one of the best comedies on TV.”

“Making You’re The Worst has been an incredible experience and FX Networks have been dream partners,” said Falk. “I am thankful to have the opportunity to be thoroughly judged whether or not we ‘stick the landing’ — which is a thing people say now that stupid Breaking Bad had to end so damn perfectly.”

The Season 4 finale of You’re the Worst airs tonight, Wednesday, November 15 on FXX (due to the Thanksgiving holiday the following week, the final two episodes are being aired together this week):

“Like People” (Episode 12, 10pm ET/PT) – Gretchen spends the day with Boone and his daughter in an attempt to distract herself from having slept with Jimmy the previous night, while Jimmy tries to prove to himself he’s moved on. Lindsay attempts to save Olivia from getting too close to the unreliable Gretchen, and Edgar trails Max to figure out why they’re no longer writing partners. Written by Alison Bennett & Eva Anderson; directed by Steph Green.

“It’s Always Been This Way” (Episode 13, 10:30pm ET/PT) – Jimmy and Gretchen go for a long drive to force a conclusion on the confusing state of their relationship. Edgar finds closure with Max while Lindsay figures out a way to solve Becca, Vernon, and Paul’s problems all at once. Written by Eva Anderson and Stephen Falk; directed by Stephen Falk.

You’re the Worst is a modern look at love and happiness told through the eyes of two people who haven’t been very successful with either. You’re the Worst is the story of Gretchen and Jimmy, fear, heartbreak, romance, sex, food, Los Angeles, Sunday Funday, friendship, and the fact that sometimes the worst people make the best partners.

An original comedy from writer and executive producer Stephen Falk, You’re the Worst puts a dark twist on the romantic comedy genre. Narcissistic, brash, and stubborn Jimmy Shive-Overly (Chris Geere) has inadvertently found himself paired up with cynical, people-pleasing, and self-destructive Gretchen Cutler (Aya Cash). After a whirlwind courtship, and a very rough post-cohabitation period of dealing with Gretchen’s clinical depression, Jimmy and Gretchen were forced to learn how to manage a relationship in the face of tragedy when Jimmy’s father unexpectedly died. Ultimately, drawn closer, Jimmy proposed and then suddenly disappeared when confronted with the notion that Gretchen would be his family. Now broken up, and involved with other people, both struggle to move on while constantly being pulled back toward one another.

Rounding out the cast is Desmin Borges, who plays Edgar Quintero, Jimmy’s once homeless war veteran roommate who, having recently learned to manage his PTSD, has gotten a new job and is navigating the world of television comedy writing; and Kether Donohue as Lindsay Jillian, Gretchen’s best friend and former partner in crime who is recently divorced and taking her first steps toward life as a single, professional woman.

You’re the Worst is produced by FX Productions.

For more about You’re the Worst:

What do you think? Is the You’re the Worst TV show ending at the right time? Should it have been cancelled or renewed for season six on FXX?

Love your the worst! Over 60 and its my middle of the night go to.

In a day when there is so little creatively in Hollywood this show was a breath of fresh air. They were no afraid to tske chances and i have thoroughly enjoyed the ride. While i will miss this show I am glade they are doing tbe ending right with a full seasin to warp things up into a satisfying ending.