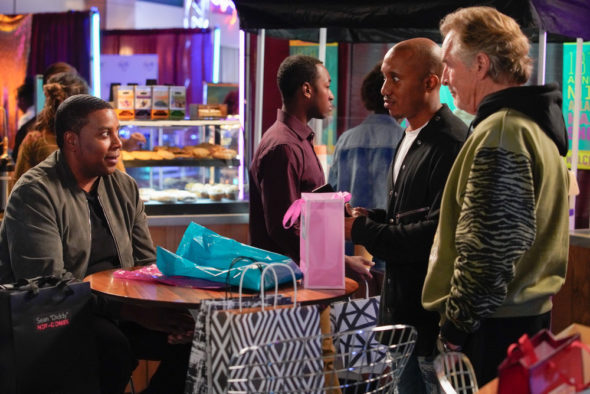 Can Kenan continue to juggle his professional and personal lives? Has the Kenan TV show been cancelled or renewed for a third season on NBC? The television vulture is watching all the latest cancellation and renewal news, so this page is the place to track the status of Kenan, season three. Bookmark it, or subscribe for the latest updates. Remember, the television vulture is watching your shows. Are you?

Airing on the NBC television network, the Kenan TV show stars Kenan Thompson, Chris Redd, Kimrie Lewis, Dani Lane, Dannah Lane, Taylor Louderman and Don Johnson. In the story, Kenan Williams (Thompson) is trying to reclaim his life following his wife’s death. Kenan’s two daughters are his world – the very intelligent Aubrey (Dani Lane) and the silly and unpredictable Birdie (Dannah Lane). He struggles to parent them as a single dad and host his Atlanta-based talk show. This leads Kenan to reluctantly accept help from his father-in-law, Rick (Johnson), but their parenting styles aren’t exactly a match. At work, Kenan excels at his job — with the help of his driven executive producer, Mika (Lewis). Mika can be tightly wound, especially when Gary (Redd), Kenan’s brother and not-so-professional manager, tries to insert himself.

The second season of Kenan averaged a 0.31 rating in the 18-49 demographic and 1.80 million viewers in the live+same day ratings (includes all DVR playback through 3:00 AM). Compared to season one, that’s down by 34% in the demo and down by 26% in viewership in the live+same day ratings (including DVR playback through 3:00 AM). While these numbers don’t include further delayed or streaming viewing, they are a very good indicator of how a show is performing, especially when compared to others on the same channel. Though other economic factors are involved, the higher-rated shows usually get renewed and the lower-rated ones get cancelled. Find out how Kenan stacks up against other NBC TV shows.

Will NBC cancel or renew Kenan for season three? This show was a middle-of-the-road performer in its first season but it returned as one of the network’s lowest-rated shows. It also only picks up about 30% in the live+7 day delayed viewing so, unless it does really well in streaming, I think Kenan will likely be cancelled.  I’ll update this page with breaking developments. Subscribe for free alerts on Kenan cancellation or renewal news.

What do you think? Were you hoping that the Kenan TV show would be renewed for a third season? Are you sorry that NBC cancelled this TV series, instead?

I REALLY want Kenan to continue! But don’t compete it with The Neighborhood!