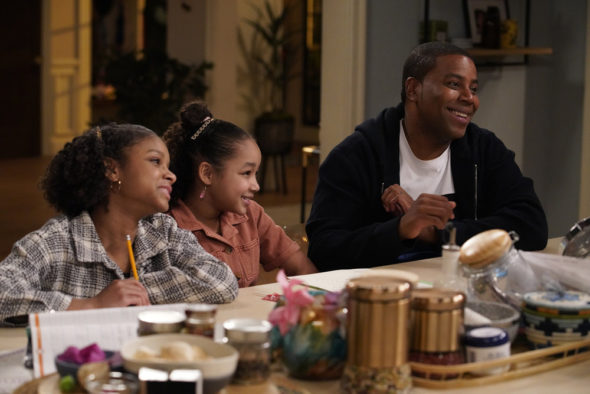 Last season, Kenan was a middle-of-the-road performer in the ratings for NBC. Will the numbers improve this time around? Will Kenan be cancelled or renewed for season three? Stay tuned.

A single-camera comedy, the Kenan TV show stars Kenan Thompson, Chris Redd, Kimrie Lewis, Dani Lane, Dannah Lane, Taylor Louderman and Don Johnson. In the story, Kenan Williams (Thompson) is trying to reclaim his life following his wife’s death. Kenan’s two daughters are his world – the very intelligent Aubrey (Dani Lane) and the silly and unpredictable Birdie (Dannah Lane). He struggles to parent them as a single dad and host his Atlanta-based talk show. This leads Kenan to reluctantly accept help from his father-in-law, Rick (Johnson), but their parenting styles aren’t exactly a match. At work, Kenan excels at his job — with the help of his driven executive producer, Mika (Lewis). Mika can be tightly wound, especially when Gary (Redd), Kenan’s brother and not-so-professional manager, tries to insert himself.

1/25 update: You can see the latest night’s ratings in context.

For comparisons: Season one of Kenan on NBC averaged a 0.47 rating in the 18-49 demographic and 2.42 million viewers in the live+same day ratings.

What do you think? Do you like the Kenan TV series on NBC? Should it be cancelled or renewed for a third season?