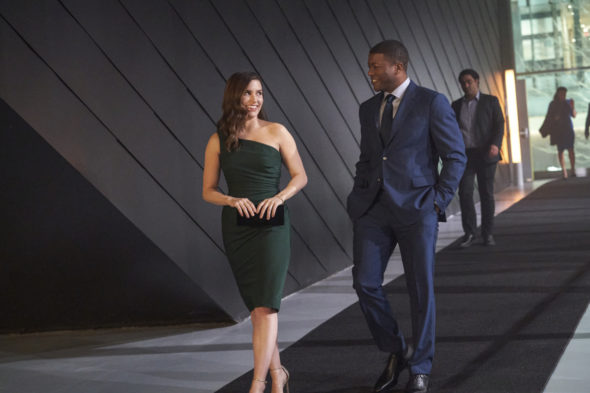 Can this father and daughter heal their relationship in the first season of the Good Sam TV show on CBS? As we all know, the Nielsen ratings typically play a big role in determining whether a TV show like Good Sam is cancelled or renewed for season two. Unfortunately, most of us do not live in Nielsen households. Because many viewers feel frustrated when their viewing habits and opinions aren’t considered, we invite you to rate all of the first season episodes of Good Sam here.

A CBS medical drama series, the Good Sam TV show stars Sophia Bush, Jason Isaacs, Skye P. Marshall, Michael Stahl-David, Omar Maskati, Davi Santos, Wendy Crewson, and Edwin Hodge. In the story, Doctor Sam Griffith (Bush) is a gifted heart surgeon who excels in her new leadership role as chief of surgery at Lakeshore Sentinel Hospital. The former chief of surgery, her former boss and renowned father, Doctor Rob “Griff” Griffith (Isaacs), had fallen into a coma. When Griff wakes up months later demanding to resume his duties, Sam is tasked with supervising this egotistical expert with a scalpel who never acknowledged his daughter’s stellar talent. As Griff defies Sam’s authority and challenges her medical expertise, the big question becomes whether this father and daughter will ever be able to mend their own relationship as expertly as they heal the hearts of their patients.

What do you think? Which season one episodes of the Good Sam TV series do you rate as wonderful, terrible, or somewhere between? Do you think that Good Sam should be cancelled or renewed for a second season on CBS? Don’t forget to vote, and share your thoughts, below.

I think Good Sam is improving every episode! The story lines are now pulling me in. I will be watching. The cast is awesome.

I really enjoy Good Sam. The storyline is excellent and I’ve enjoyed Sophia Bush since she was on Chicago PD.

Enjoying the stories, the cliffhangers and the surprises!

Show may have a chance

Truly Awful
The worst acting ever all around.

The only good thing about this show is Wendy Crewson.

Pilot episodes always have to spend time establishing characters and story line. There were several surprise moments that really held my interest. I think this show has good possibilities. Will keep watching.

I love the first episode, and Sofia Bush is one of my very fav. actress. I think this will be my Fav Tv Show! 😉 <3

Thought the show was pretty good. Time will tell.

We liked the first episode. Dad was a bit much. Hopefully he won’t be quite so obnoxious in future episodes. Reserving judgement on the series for more episodes.

Not so good. Actually awful

Rick B.
Reply to  yogidozer

Sophia Bush should have stayed on Chicago PD.