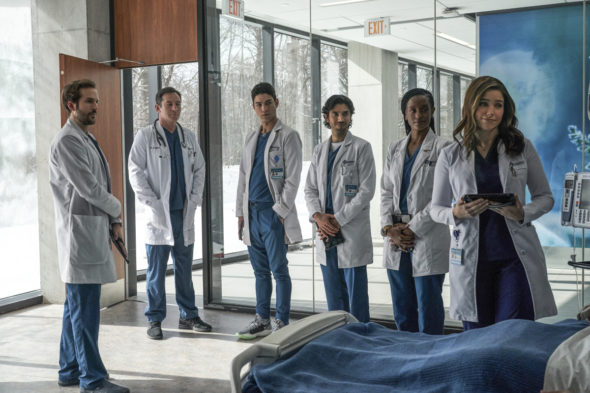 In the story, Doctor Sam Griffith (Bush) is a gifted heart surgeon who excels in her new leadership role as chief of surgery at Lakeshore Sentinel Hospital. The former Chief of Surgery, her renowned father and former boss, Doctor Rob “Griff” Griffith (Isaacs), had fallen into a coma.

When Griff wakes up months later demanding to resume his duties, Sam is tasked with supervising this egotistical expert with a scalpel who never acknowledged her stellar talent.

As Griff defies Sam’s authority and challenges her medical expertise, the big question becomes whether this father and daughter will ever be able to mend their own relationship as expertly as they heal the hearts of their patients.

Series Finale:
Episode #13 — To Whom It May Concern
In the wake of Sam’s successful execution of a groundbreaking surgical technique, the battle between her and her father, Griff, takes a shocking turn that will irrevocably change their family dynamic and the future of the hospital.
First aired: May 4, 2022.

What do you think? Do you like the Good Sam TV show? Do you think it should have been cancelled or renewed for a second season?

This edition of diversity was complained about as opposed to the one on New Amsterdam, but many like the Good Sam edition of interracial romance. Other networks ban twitter accounts with anti racial harmony rhetoric. Other demographics besides 18-49 are just as important and powerful in buying. Tv hosts have said watching is more important than liking or disliking. Many visceral reactions say this show is being watched and liked by many demographics. It was cancelled too quick as this viewer discovered it long after cancellation. Viewers outside the 18-49 demo, like this show as displayed on here. Please bring… Read more »

I love this show. Please renew it.

Looked at pilot, think the elder doctor is not worth the time to watch. Especially after there was a brief look at upcoming episodes.
More of the same. If I want that much endless conflict, and backstabbing, I can watch the news.
Reading a book sounds better, or even the Weather channel.

Jason Isaacs is the only compelling actor in this cast. He’s too good for this show.

The Good Doctor, The Resident, Chicago Med and New Amsterdam are all better. This show is trying to be House 2.0, but it’s not even half as good.