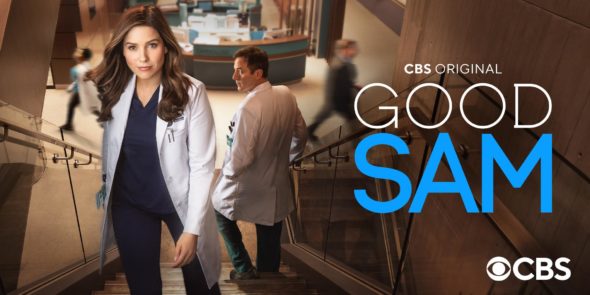 While CBS has plenty of crime and procedural shows, the network doesn’t have any medical dramas. Now, they’ve introduced Good Sam to the schedule. Will it be just what the programming doctor ordered and draw big ratings or will it be DOA? Will Good Sam be cancelled or renewed for season two? Stay tuned.

A medical drama series, the Good Sam TV show stars Sophia Bush, Jason Isaacs, Skye P. Marshall, Michael Stahl-David, Omar Maskati, Davi Santos, Wendy Crewson, and Edwin Hodge. In the story, Doctor Sam Griffith (Bush) is a gifted heart surgeon who excels in her new leadership role as chief of surgery at Lakeshore Sentinel Hospital. The former chief of surgery, her former boss and renowned father, Doctor Rob “Griff” Griffith (Isaacs), had fallen into a coma. When Griff wakes up months later demanding to resume his duties, Sam is tasked with supervising this egotistical expert with a scalpel who never acknowledged his daughter’s stellar talent. As Griff defies Sam’s authority and challenges her medical expertise, the big question becomes whether this father and daughter will ever be able to mend their own relationship as expertly as they heal the hearts of their patients.

1/20 update: You can see the latest night’s ratings in context.

What do you think? Do you like the Good Sam TV series on CBS? Should it be cancelled or renewed for a second season?

By bringing the cast from a previous show makes them look desperate for a rating bump. I couldn’t finish the first episode because Sophia Bush’s acting hasn’t improved since OTH. Just cancel the show already, and replace it with something better.

I think it’s an interesting show. But it could maybe get better at the scene, and make it more funny. I would like to see the show get a chance because it’s a good show to watch on tv.