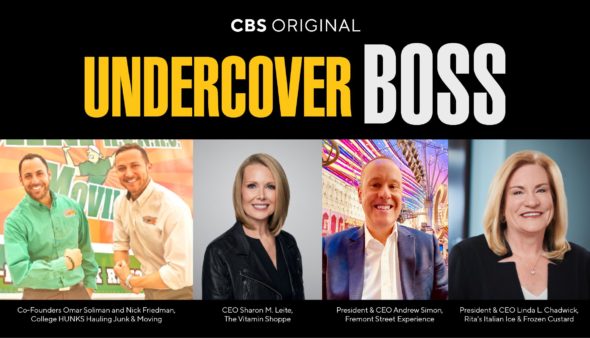 While the ratings for Undercover Boss aren’t typically very high, CBS can use the series to fill in gaps in the network schedule. Will that be enough to keep it on the air? Will Undercover Boss be cancelled or renewed for season 12? Stay tuned.

A long-running reality series, Undercover Boss follows members of major corporations’ upper management as they go undercover in their own companies, to get an idea of what it’s like to work as a lower-level employee. Subjects this season include executives and employees from Rita’s Ice, Vitamin Shoppe, Fremont Street, and College HUNKS. Created by Stephen Lambert, the show is based on the UK program of the same name and Mark Keller serves as the narrator.

1/22 update: You can see the latest night’s ratings in context.

For comparisons: Season 10 of Undercover Boss on CBS averaged a 0.36 rating in the 18-49 demographic and 2.65 million viewers.

What do you think? Do you like the Undercover Boss TV series on CBS? Should it be cancelled or renewed for a 12th season?