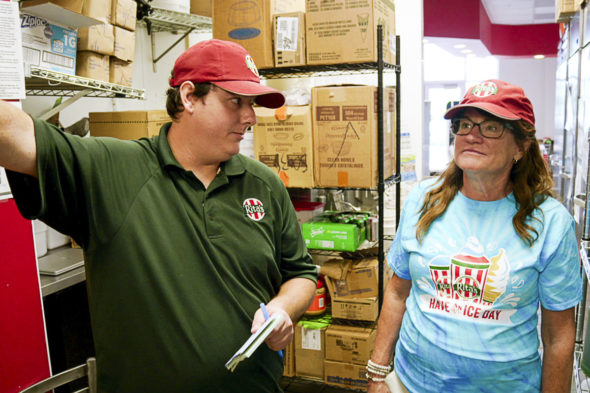 Have you worked alongside a CEO in disguise? Has the Undercover Boss TV show been cancelled or renewed for a 12th season on CBS? The television vulture is watching all the latest cancellation and renewal news, so this page is the place to track the status of Undercover Boss, season 12. Bookmark it, or subscribe for the latest updates. Remember, the television vulture is watching your shows. Are you?

Airing on the CBS television network, Undercover Boss follows members of major corporations’ upper management as they go undercover in their own companies, to get an idea of what it’s like to work as a lower-level employee. Subjects this season include executives from Rita’s Ice, Vitamin Shoppe, Fremont Street, and College HUNKS. Created by Stephen Lambert, the show is based on the UK program of the same name and Mark Keller serves as the narrator.

The 11th season of Undercover Boss averaged a 0.39 rating in the 18-49 demographic and 3.58 million viewers. Compared to season 10, that’s up by 9% in the demo and up by 35% in viewership in the live+same day ratings (including DVR playback through 3:00 AM). While these numbers don’t include further delayed or streaming viewing, they are a very good indicator of how a show is performing, especially when compared to others on the same channel. There can be other economic factors involved in a show’s fate, but typically the higher-rated series are renewed and the lower-rated ones are cancelled. Find out how Undercover Boss stacks up against other CBS TV shows.

Will CBS cancel or renew Undercover Boss for season 12? This show doesn’t draw big ratings but it seems cheap to produce and it’s one of those shows that can be used to fill in gaps in the network schedule. Unless CBS finds another show that they can use that way, I think Undercover Boss has a good chance of being renewed. I’ll update this page with breaking developments. Subscribe for free alerts on Undercover Boss cancellation or renewal news.

What do you think? Do you hope that the Undercover Boss TV show will be renewed for a 12th season? How would you feel if CBS cancelled this TV series, instead?

I really love undercover boss it always makes me cry at the end…I love how the boss is able to really see what it’s like from an employee view
..very important…please do not cancell it

Please continue to keep Undercover Boss! I think the show is not just an entertainment show, I think it is vital to the economic growth of our country and to the spirit of the workers in this country who are struggling under terrible conditions which is what the show reveals (and the bosses in the show find out about and remedy). I especially like that the last one I watched about Coco’s Restaurants/Bakery, showed that the company, itself, is struggling and was doing things to help keep themselves going in the face of the COVID-19 Pandemic.

PLUS CONTINUE UNDERCOVER BOSS. I LOVE IT PLUS I WAS ON THE EPISODE FEATURING THE MGM GRAND CASINO IN LAS VEGAS.