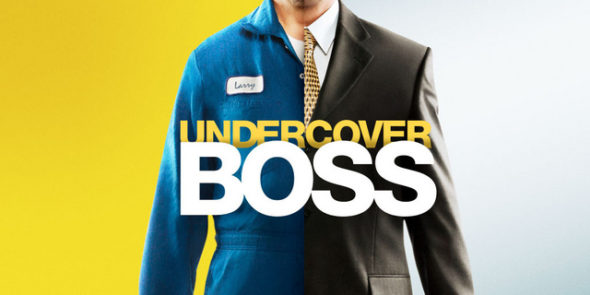 Be on your best behavior, because the bossman’s coming back. CBS has renewed its Undercover Boss TV show for a ninth cycle, which will premiere during the 2019-2020 television season. Last year, the Tiffany Network aired Undercover Boss: Celebrity Edition which was presented as a spin-off.

A documentary reality series on the CBS television network, Undercover Boss follows members of major corporations’ upper management as they go undercover in their own companies, to get an idea of what it’s like to work as a lower-level employee. Created by Stephen Lambert, the show is based on the UK program of the same name. Mark Keller serves as the narrator.

Undercover Boss: A Look at the Ratings

What do you think? Are you a fan of the Undercover Boss TV series? Do you plan to check out season nine when it debuts on CBS?

Only now getting into watching this show. I was instantly hooked…the first reality show I’ve ever liked. Being more a documentary about real-world working conditions of real people made all the difference. Wonderful knowing that more and more company heads want to get in tune with their associates and taking such a giant step to walk a mile in their shoes and hear their stories. While such efforts might only be baby steps in creating a more fair-minded world, it gives hope humanity might be fitfully coming together. It leaves me in tears more times than not by the end… Read more »

Although I am retired, I love Undercover Boss so I am anxiously waiting for your 10th season to begin!

Hello, I was a patron at a Blasdell, NY, Applebee’s and we were escorted to our table by a young man who was moving as fast as he could, despite having what appeared to be somewhat of a deformed foot, which was causing him to walk on the side of it, causing the shoe to have worn out. I felt bad for him and thought of your program somehow. I was able to see his name tag which said “Jeff” on it. He was wearing a wedding ring, and I was just thinking and wondering about his “story”……did he work… Read more »

So sweet of you! I don’t work for Undercover Boss but just wanted to say you seem like a kind person. Nice to see.

When does it premiere?

I absolutely love the show Undercover Boss. I may be sensitive and that’s why I tear up at the ending when the “bosses” sit down with the employees they shadow but it just shows there are a lot of compassionate bosses. I just wish the current CEO of Wayback Burgers came to my store in Meriden, CT when I was the General Manager! I would have loved to show them how dedicated and passionate I was about the company.