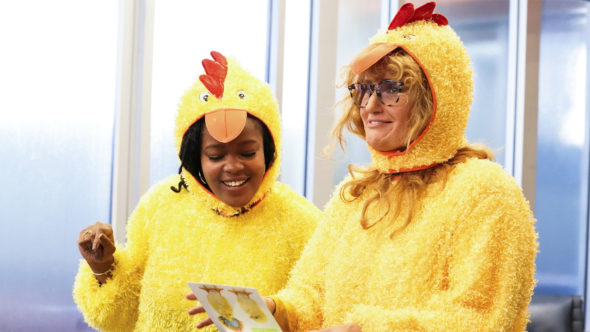 Undercover Boss will be back! CBS just announced they’ve ordered a 10th season of the TV show for the 2020-21 season.

The Undercover Boss series follows members of major corporations’ upper management as they go undercover in their own companies, to get an idea of what it’s like to work as a lower-level employee.

The ninth season of Undercover Boss averages a 0.68 rating in the 18-49 demographic and 4.12 million viewers. Compared to season eight, that’s down by 32% in the demo and down by 27% in viewership. Even with the ratings drop, CBS has decided to give Undercover Boss another chance.

CBS has only aired four episodes in the ninth season, all in January 2020. It’s unclear if season nine of Undercover Boss is finished or if it will resume before the 2019-20 broadcast season is out. The network could be holding onto any leftover episodes and plans to include them in season 10. We’ll have to wait and see. Regardless, we know there are more episodes to come.

What do you think? Do you watch the Undercover Boss TV series? Are you glad it’s coming back for the 2020-21 season?

I loved Undercover Boss. I watched for a few years. I found it fascinating watching the bosses doing the different jobs. My favorite part was when the boss would give the employee a reward. After watching for a few years, the show suddenly disappeared. I would try turning it on, but I couldn’t find it. I just found out it was on last year. I don’t know how I missed it. I will try finding it again, or please send an email to let me know when it is on again. Thank you very much. In my opinion, it is… Read more »

How about you finish showing season 9 before you do this. You have only shown 4 episodes.

Glad to hear Undercover Boss is coming back. Looking forward to it.

UNBELIEVABLE! You canceled MAN WITH A PLAN & kept this idiotic cr.p? You must not care what the audience wants that for sure. This is one of the stupidest shows ever!