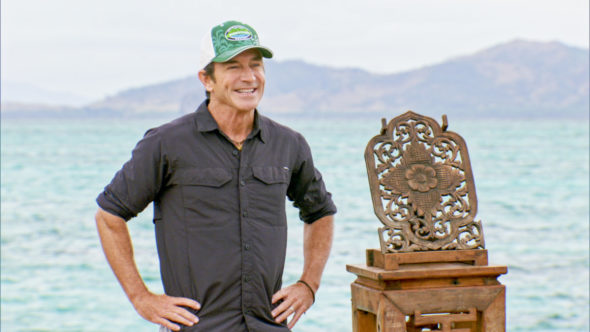 Not that it was in any danger of being cancelled, but the news is now official. The Survivor TV show has been renewed for a 39th season on CBS. The grand-daddy of reality TV series remains immune from extinction and will be back for another cycle during the 2019-2020 television season. The renewal comes early, as Survivor season 38 is still airing. No premiere date has been announced, but expect it to debut in the fall, as CBS has already scheduled it for Wednesdays at 8:00pm ET/PT, ahead of SEAL Team and SWAT.

A competitive CBS series, Survivor is hosted by Jeff Probst and features a group of castaways who try to outwit, outlast, and outplay each other. The players share the ultimate goal of hanging on until the very end, in hopes that they will be named the sole survivor and will win the $1,000,000 prize money. In cycle 38, Survivor: Edge of Extinction, the show features a new twist: after players are voted out, they get to choose between going home or to the “Edge of Extinction,” where they face tough challenges for a chance to return the game.

Survivor: A Look at the Ratings

Survivor is not just the top rated unscripted series on the network, it also bests the rest of TV shows on CBS, except for Big Bang Theory and its successful spinoff, Young Sheldon.

What do you think? Are you still watching the Survivor TV series on CBS? Does it deserve this renewal, or should the format take a few years off? Let us know in the comments below.

After never missing an episode I believe season 38 will be the last I watch. After hearing that season 39 will have to villains “coaching” survivors I threw my hands up in disgust. So basically the vile, nasty, disgusting way Rob treated other players is being rewarded by bringing him back….he is a low life yet the show celebrates him. So it seems next seasons message will be….Be a bully and win in life. I’m disappointed they are giving that vile creature more tv time.

Our family loves survivior. It’s a great show, my kids love it too. I hope it has many more seasons.

Keep it going!!!! I thought edge of extinction could have been utilized differently though. Allow active game players to link up with castaways and their castaway counter parts can gift them information if they do well in their own challenges and if they do bad in their own challenges then the active player they are linked up with would be given some type of handicap as a result of their castaway failing at a challenge. Also an idea. Have a new player get to chose any willing player from previous seasons as a partner. The active player and previous player… Read more »

I love Survivor, but not a huge fan of this season’s Edge of Extinction theme.

I also love Survivor but I did not like David vs. Goliath it was like it was planed to take out people and the winner Nick Wilson looks like a set up ? SAD but it looked like they set up the show for him to win even though he was NOT the OUTWIT-OUTLAST-OURPLAY person just my opinion even when she kept patting his leg saying I AM SORRY over and over again then the votes were read and Nick Wilson won NO SURPRISE THERE !!!!!!!!!!!! I have watched every show never missed an airing every week . LOVE SURVIVOR… Read more »

Best show on TV!
GoT could never…