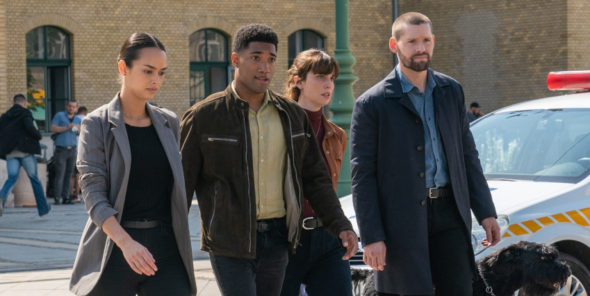 CBS has had many successful procedural dramas over the years and the FBI franchise seems to be no exception. Now, the network has introduced a third spin-off, FBI: International, and has devoted an entire night to FBI shows. Will this move boost CBS’ ratings or, could three FBI shows be too many? Will FBI: International be cancelled or renewed for season two? Stay tuned. Status Update Below.

A procedural drama series, the FBI: International TV show is the second spin-off in the FBI franchise. It stars Luke Kleintank, Heida Reed, Vinessa Vidotto, Christiane Paul, and Carter Redwood. The story follows the elite operatives of the Federal Bureau of Investigation’s International Fly Team. Headquartered in Budapest, they travel the world with the mission of tracking and neutralizing threats against American citizens wherever they may be. They put their lives on the line to protect the U.S. and its people. Special Agent Scott Forrester (Kleintank) is the Fly Team’s accomplished and dedicated leader and his second in command is Special Agent Jamie Kellett (Reed). Special Agent Andre Raines (Redwood) shines in the field and makes good use of his accounting background while Special Agent Cameron Vo (Vidotto) excels at interrogation and strategy. The team’s key ally is Europol Agent Katrin Jaeger (Paul), a multi-linguistic liaison between the FBI Fly Team and each host country they inhabit.

What do you think? Do you like the FBI: International TV series on CBS? Should it be cancelled or renewed for a second season?

I enjoy this show except for the fact that there locations are Bazaar. Episode 17 took place in Occitanie France, and the team located in Place de la Mairie, which is over 8 hours away and nowhere near the wine country. One of the things I love about shows filmed around the world is their accuracy on locations and I wish this one had the same accuracy. It takes the fun out of their locations completely. I may not continue to watch if there is a second season

I love FBI International. It is my favorite, then FBI, then FBI Most wanted. I would love to have the dvds of the first 2. Then I could watch them when ever I want. As it is, my work schedule makes me miss them every other week! Aghhhh.

I enjoyed every episode, love the dynamics of the team, and I like that its not too violent and explores the dark underside of European crime and police interaction. Looking forward to season two. Please renew.

This is my favorite of the three shows. Most wanted is too dark for me. I do like the original too, just not quite as much as international.

Yes I love all the fbis

I’m a retiree and just discovered this show. I like it and am learning a lot! Am binging all the episodes. Thank you.

It is sad when the dog in the show is the best thing about it!

FBI International is awesome it is fast paced and based in Europe so I like the atmosphere. The story lines are great and not to over the top for a crime show

Are you sure you are watching the same Show?

The new FBI International was a great show, it really fit in well with the FBI, and FBI most wanted. I give this new series a big thumbs up.

I love the new FBI show it was so good.