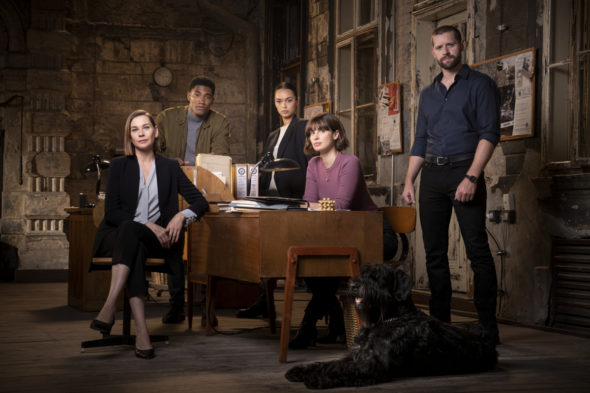 TV show description:
A procedural drama series, the FBI: International TV show was created by Derek Haas and is the second spin-off in the FBI franchise.

The story follows the elite operatives of the Federal Bureau of Investigation’s International Fly Team. Headquartered in Budapest, they travel the world with the mission of tracking and neutralizing threats against American citizens wherever they may be. They put their lives on the line to protect the U.S. and its people.

Special Agent Scott Forrester (Kleintank) is the Fly Team’s accomplished and dedicated leader. He puts his missions ahead of his personal life and is rarely seen without the team’s “secret weapon” – their trusty Schutzhund dog, Tank.

The team’s second in command is Special Agent Jamie Kellett (Reed). She’s not afraid to tussle (in an alley or courtroom) and her extensive network of informants is a powerful resource.

A vital part of the mix is unflappable Europol Agent Katrin Jaeger (Paul), a multi-linguistic liaison between the FBI Fly Team and each host country they inhabit.

What do you think? Do you like the FBI: International TV show? Do you think it should be cancelled or renewed for another season?

About FBI International. I kept hoping in the aftermath of FBI which I think is well-done, this would have added international interest but no, we are forced to focus on Luke. Who hasn’t an international bone in his body. His focus is his ego. Terrible.

Best “Dick Wolf” product ever! Better than L&O and all the other FBIs.

I love FBI International mainly because of Vinessa Vidotto. Please do not let her go off the show and also enlarge her part so she has more influence. I am
not crazy about the other players. They are okay and I enjoy FBI programs.
The FBI “Most Wanted” is my least favorite and the actors should be replaced. I like the original FBI and the female star but Vinessa is my favorite star. She adds a lot to the show, showing strength and intelligence and we need to see that in our female FBI and police.

I love this show. Look forward to it every Tuesday night with the other FBI ones on same night.
Please make season 2

I love FBI International! I especially like the cultural aspects of the show. International attempts to show the differences between American policing and the policing in other countries. Although this aspect tends to be superficial and I wish there were more of it, at least it tries. As someone who has lived in other countries I like the fact that the show tries to level the playing field between America and other countries.
I also wish the dog would be more a part of the show.
Please don’t cancel the show!

I do not like FBI International, but love FBI and FBI Most Wanted

I like the show. However, in the episode I am watching now on CBS (the son is kidnapped by abusive father), the agent from Ohio said there is only one festival in Ohio. At the risk of being proud of my state and community, Columbus, Ohio alone has at least one festival every weekend and there are many year-round throughout Ohio.