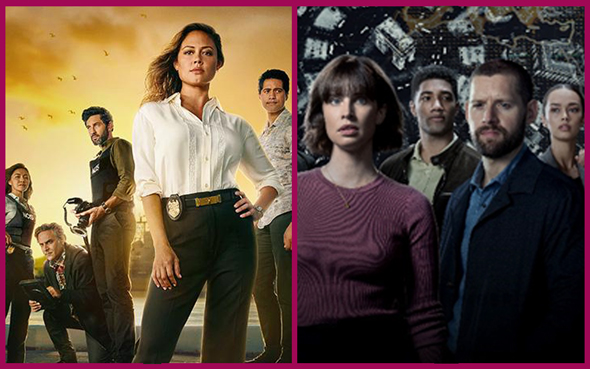 The 2021-22 TV season is just a few weeks old and CBS has already decided to have faith in two of the network’s three new drama series. The Tiffany Network has given full-season orders to NCIS: Hawai’i and FBI: International. Both shows have been moderate successes in the traditional ratings thus far. No word on the future of CSI: Vegas, which just launched last week.

How many episodes have been ordered for each show? Word is that the numbers are still being finalized. In recent times, a full-season order would mean 22-24 episodes. These days, the networks are more flexible as budgets have tightened and shorter seasons have come into vogue.

Heres’ the announcement from CBS:

CBS has given full season orders to its top freshman dramas NCIS: HAWAI`I and FBI: INTERNATIONAL for the 2021-2022 broadcast season. The CBS Original series represent two of the top three new shows that launched on broadcast networks in September this season.

“These two terrific new dramas are off to a tremendous start,” said Kelly Kahl, President, CBS Entertainment. “They have significantly strengthened and improved our lineup on their respective nights and are generating huge increases on our streaming platforms as well. We applaud the talented producers, writers and casts on their compelling storytelling and performances, which are clearly resonating with viewers.”

NCIS: HAWAI`I is the #1 new series this season and a key part of CBS’ Monday winning streak. In addition to winning its Monday 10:00 PM time slot in viewers, averaging 9.3 million, it has improved the hour +381% from the same time period last year.

FBI: INTERNATIONAL is the #3 new series to date, averaging 8.79 million viewers over the first two episodes, up +358% in the Tuesday 9:00 PM time period from the same weeks last year. CBS’ all-FBI Tuesday is winning a very competitive night by well over +1 million viewers.

About NCIS: HAWAI`I
The world’s most successful television series continues on the seductive shores of the Aloha State with NCIS: HAWAI`I, where the first female special agent in charge of NCIS Pearl Harbor, Jane Tennant (Vanessa Lachey), has thrived and risen through the ranks by equal parts confidence and strategy in a system that has pushed back on her every step of the way. Together with her unwavering team of specialists, they balance duty to family and country while investigating high-stakes crimes involving military personnel, national security and the mysteries of the sun-drenched island paradise itself. NCIS: HAWAI`I stars Vanessa Lachey, Alex Tarrant, Noah Mills, Yasmine Al-Bustami, Jason Antoon, Tori Anderson and Kian Talan. Matt Bosack, Jan Nash and Christopher Silber are executive producers for CBS Studios.

About FBI: INTERNATIONAL
From Emmy Award-winning executive producer Dick Wolf, fast-paced drama FBI: INTERNATIONAL is the third iteration of the successful FBI brand that follows the elite operatives of the Federal Bureau of Investigation’s International Fly Team. Headquartered in Budapest, they travel the world with the mission of tracking and neutralizing threats against American citizens wherever they may be, relying on intelligence, quick thinking and pure brawn as they put their lives on the line to protect the U.S. and its people. Always at the scene where American interests are at risk, FBI: INTERNATIONAL is a globe-trotting depiction of law enforcement overseas. The series stars Luke Kleintank, Heida Reed, Carter Redwood, Vinessa Vidotto and Christiane Paul. Dick Wolf, Derek Haas, Matt Olmstead, Michael Katleman, Arthur Forney and Peter Jankowski are the executive producers. The series is produced by Wolf Entertainment and Universal Television, a division of Universal Studio Group, in association with CBS Studios.

What do you think? Have you been watching either of these two shows? Do you think one or both will survive to see a second season on CBS?

Enjoy new NCIS Hawaii very much. It gets better with every passing week.

Ncis Hawaii is awful. Stopped watching after the 3 rd show. I don’t like Fbi international either. It may be because I am unfamiliar with the actors. Stories are boring too.

Try giving it a little time, you might find out you like it after a few weeks.

Watch all 3 best series ever

Ncis Hawaii is awful. Fbi international is growing on me.
Csi will be ok when it gets going. It will be interesting to see where it goes for David.
CBS sucks for giving us only 4 episodes of seal team and then going to paid streaming. Greedy

I agree, fbi is okay to pass the time, rather bland like the other fbi shows. However ncis Hawaii is the worst show ever set in Hawaii. Cast has no chemistry at all, and was DOA