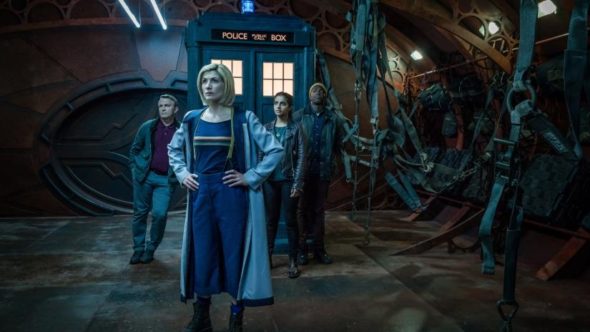 Will The Doctor and her companions save the day? Has the Doctor Who TV show been cancelled or renewed for a 13th season on BBC America? The television vulture is watching all the latest cancellation and renewal news, so this page is the place to track the status of Doctor Who, season 13. Bookmark it, or subscribe for the latest updates. Remember, the television vulture is watching your shows. Are you?

Will BBC cancel or renew Doctor Who for season 13? The show continues to be very popular and, on BBC America, season 11 was up by more than 30% when compared to season 10’s ratings. I have no doubt it will be renewed. I’ll update this page with breaking developments. Subscribe for free alerts on Doctor Who cancellation or renewal news.

What do you think? Are you glad Doctor Who has been renewed for a 13th season? How would you feel if BBC America had cancelled this TV series, instead?

Tired this topic getting weird so done. Look forward every year not same style as when started from long time ago entertainment British syfy awesome.

I just can’t find it. Is it still on cable? When and where? Or is it all subscription TV now? Cable/subscription is pushing everything to be too expensive!

I can’t wait one of my favorite shows for syfy genre.

I am proud to say I have watched every episode of Doctor Who since 1964. The few exceptions are the now lost episodes from the late ‘60’s. There can be no doubt that the BBC has changed the show. Some of the magic of the original run of Doctor Who was that it did not push any geo-social political agendas on to its audience. That is no longer the case with Chris Chibnall’s and Jodie Whittaker’s Doctor Who. Doctor Who was originally made to be educational. The idea was that the Doctor, Susan, Barbara and Ian would travel back to… Read more »

I couldn’t agree more with your comments. Instead of inventing new characters, today’s PC writers are intent on rewriting the canon of every major & even minor literary character. It’s a cultural cleansing that would make the most despotic regimes smile.

I love love Dr. WHO. I JUST HAVE ONE QUESTION IS RIVER SONG GOING TO COME BACK this or next season. What ever you do never stop making Dr Who shows. One day I hope to see Dr. Who on the big screen. That would be awesome. Thanks Betty Mcglauchlen. Jennings La

I hope its cancelled and rested. It has been sad to see a much loved program deteriorate in to a hash of ideas and constant stream of propaganda. If they wanted a female time Lord they could easily have done a spin off but no they mess with Doctor Who. Doctor Who is male and there is room for a female time Lord but not the Doctor. It’s been painful at times to watch the essence of the Doctor destroyed to promote political agendas. It’s a shame no one thought to cast Sacha Dhawan as the Doctor, he would have… Read more »

People keep complaining about “wokeness”, but series 11s issues were with the writing. Trying to introduce a new Doctor and *3* new companions (plus the companions families) made it hard to establish anyones personality. Throw in some bizarrely uninteresting antagonists, a terrible case of tell-dont-show (deadly water for example), and some unnecessary tweaks to the format (no classic villains, no multi-episode stories, no Christmas Special) and the show used up a lot of good will. Series 12 has addressed a lot of the above complaints. It’s still not great, but it’s definitely an improvement on series 11. If the final… Read more »

Chibnall needs to go yeah. jodie, unfortunately, needs to go too. she has what it takes to be a good doctor but after these two seasons i don’t think any of the lost viewrs will give her another chance. but honestly i’m not sure it will make it past next season with chibnall as showrunner and ryan and graham’s actors leaving. i’m with the show till the end but i’m not optimistic about the future

Sad. It needs to be canceled. It’s too far gone. Hopefully in a year or two it can be Resurrected.

ratings will go up when they stop the “woke” agenda,sorry but forcing too many changes will kill this show, we dont need a master AND doctor to be a person of color, we have the “diversity” with the companions, including season 10 with a gay “diverse” character, the show isnt fun anymore, its become a “political machine” now.

I wasn’t a big fan of Bill but I didn’t see her as super woke because it wasn’t pushed down our throats like every episode of the Chibnall era.