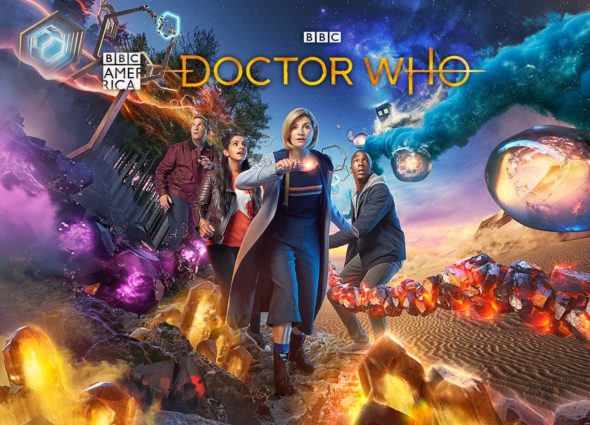 And now for something completely different… The Doctor Who TV show originally premiered in UK on BBC in 1963 and ran through 1989. The program was revived in 2005 and hit the US in 2006, first on Syfy‘s forerunner (Sci-Fi Channel) before the move to BBC America. As of last year, 12 men had played the fabled Time Lord, but some fans had long been noting it was past time for a female lead. Now that that day is here, will it draw in new viewers,  or will the change be too difficult for some fans to accept? Will Doctor Who be cancelled or renewed for season 12? Stay tuned. **Status update below.

A BBC America science-fiction drama, the 11th season of Doctor Who stars Jodie Whittaker as the 13th Doctor. The series centers on a Time Lord from the planet Gallifrey, known only as The Doctor, as well as her team of friends – Ryan (Tosin Cole), Yasmin (Mandip Gill) and Graham (Bradley Walsh). Guest stars in season 11 include Sharon D. Clarke, Johnny Dixon, Samuel Oatley, Shaun Dooley, Susan Lynch, and Art Malik.

What do you think? Are you still watching the Doctor Who TV series? Did you think this BBC America TV show would be cancelled or renewed for a 12th season?

Numbers speak for themselves. The brilliance and enduring nature of this masterpiece of a series has always catered a few flaws, controversial issues, and questionable episodes all together by a few show-runners throughout its extensive history. To say there had been little source material or reference guide to the execution of better episodes is ridiculous. Just look at Davies’ very first episode with Eccleston and his reference gem to Pertwee’s run as our third Doctor, without having to OVERSELL his agenda and mannerism to identify himself against the frightening auton’s. Sure, every doctor may of had their share of unfavorable… Read more »

This show is very unwatchable mess.

Can’t watch what is NOT being shown. This makes the 2nd Calendar Flip / Season without holding on to the season series already shot but just not showing for the season segment placement bbca has accomplished. First was done with Peter, now with Jodie. I’m done with this nonsense. Even a 4 episode “season” Luther was untenable.

The following is a quote from syfywire. “While fans are obviously bummed at having to sit through an entire calendar flip before the next series arrives, at least we aren’t quite done…”
I don’t care anymore. This is the 2nd calendar flip no show season they’ve done to fans. The first was with Peter Capaldi, and now with Jodie Whitaker’s Doctor. There’s no justification and no reason and no response for any of this on the net, and this is the closest and it’s not even from bbca! No respect. Complete jerk around. Basta! I’ve had plenty. Good Riddance.

It is simply the worst written and poorly acted season of Dr Who I have ever seen in my life! Nothing about this actress endears herself to the viewer, though, to be honest, being continually handicapped with stories and scripts written on the level of a 10th grade drama class, may be too much to ask of any actress or actor …….

The simple fact of the matter is that the new doctor isn’t very good. There is a difference between not knowing what you are going to do in the moment (Tenant/Smith) but projecting the confidence that you will find an answer, and appearing constantly confused and befuddled. The timing, attitude, and “it” factor simply are not there in the latest series. Its not necessarily the fact that a woman has been placed in the lead either because a) the “it factor” has been missing with other male stars and b)someone like Brie Larson (the new Captain Marvel) probably has the… Read more »

Rotten Tomatoes gives an accurate understanding…critics 91, fans, 20. Critics love a good overt political push it seems in leu of any actual story…fans just want their Who back. At season 10, the signs were there that they were going to simply forego any actual story and instead just make a political propaganda piece draped in the corpse of the time lord. Bring back Tennant and Smith days when sure, there was some political messages veiled cleverly into the backend of the story, but the main focus was a solid personal story. Alas, it is out of the hands of… Read more »

Horrible Season, Its bad enough that Social Media, The News, and the whole of the internet is flooded with an insane SJW agenda but now i am having it forced down my throat in a beloved series. Its madness. I don’t feel like i am being entertained, more lectured to. I stopped watching.

As a Doctor Who fan since the day’s of Jon Pertwee, I can only say that this series is beyond repair and should be scrapped before any more harm can be done to it. For the love of childhood memories please end this rubbish now. Nobody really liked the idea of a female “Doctor Who” in the first place, but the PC minority had it’s way. This is no longer worth watching. The direction this show has taken is simply straight to hell. More of a “Scooby Who” than a “Doctor Who” just wait until K9 is shoehorned back to… Read more »

I only managed 2 episodes of series 11. I refuse to be preached to politically. That should be left to party political broadcasts. 22% on Rotten Tomatoes will give you a clue as to how well this series has been received by the public. The writing was my main issue but having a 36 year old behaving like a teenager was also frustrating. Gender is irrelevant as long as they choose the right person but I do not believe they did. I am glad I jumped ship as some of friends watched a little longer before they gave up. Doctor… Read more »

lilij
Reply to  A Misfit

Not a fan of the new season. In fact, I’ve stopped watching altogether. Personally, I don’t want a female Doctor. I like Jody as an actress but she just doesn’t do it for me as a doctor. The writing is just okay and to repeat what another commenter said, it feels liberal, preachy, and not fun.

Greetings everyone and Happy New Year! Yesterday my Mrs and I watched Jodi Whittaker’s version of the Doctor for the first time, BBC America had been running episodes since Christmas Eve pretty much 24/7. We were privileged to see a few David Tennat and Matt Smith episodes that we had not previously seen. Also we realized that Peter Capaldi did quite a good job at playing the character. The first two episodes of Whittaker’s version were not that bad, we actually enjoyed them both, our biggest issue was some of the accents were so thick and spoken so quickly that… Read more »

I have been a fan since the 60s and was thrilled when the series rebooted. I could not wait for new seasons to begin or Christmas specials. I have a Tardis cookie jar and my own sonic screwdriver. The female doctor is not the problem. She has definite potential if she had a decent plot. Her companions also are not the problem. The writing bears no resemblance to sci-fi. She is not cast as a heroine in the abysmal story lines. There is no advancement of the saga. I am extremely disappointed and have stopped watching entirely. The series is… Read more »

I do not mind a female Doctor Who, I don’t mind the diverse companions, I do mind being preached the Social Justice warrior, Liberal mantra and the social engineering messages.
I am a devoted Dr. Who fan since Tom Baker but this new programming turned me away.
It’s like going to liberal church every episode.

As a longtime (since 1979) fan, I can only comment that Doctor Who needs the right producer, the right writers and the right actors if it is to work. In short, it should be in the hands of people who understand what this beloved, iconic series is really all about. And above all it should be FUN and it should be ESCAPIST ENTERTAINMENT, not preachy history lessons and moralizing. Doctor Who has always had social messages but they used to be camouflaged and embedded in subtext. Season 11 took away the subtlety (and all the joy) and turned the first… Read more »

Holly, your comment “In short, it should be in the hands of people who understand what this beloved, iconic series is really all about. And above all it should be FUN and it should be ESCAPIST ENTERTAINMENT, not preachy history lessons and moralizing.” hit the nail on the head….dead center! What makes Doctor WHO the great series it has been is the fact that it was based on having villains who were mostly if not totally all “non-human” and all humans were on the same side, not a sounding board to point fingers and vilify one group of humans while… Read more »