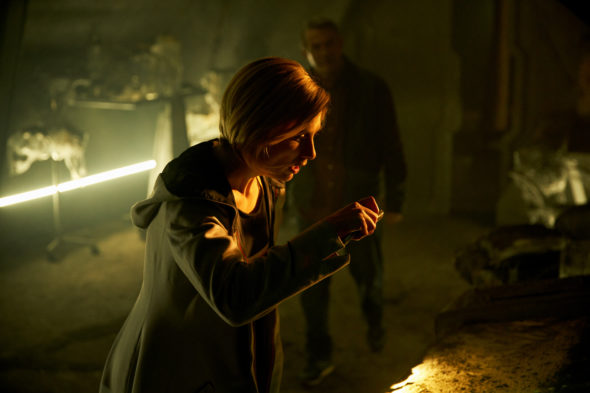 What do you think of the 13th doctor and the 11th season of the Doctor Who TV show on BBC America? As we all know, the Nielsen ratings typically play a big role in determining whether a TV show like Doctor Who is cancelled or renewed for season 12 in the US. Unfortunately, most of us do not live in Nielsen households. Because many viewers feel frustration when their viewing habits and opinions aren’t considered, we’d like to offer you the chance to rate all of the Doctor Who season 11 episodes. **Status update below.

A BBC America science-fiction drama, Doctor Who stars Jodie Whittaker as the 13th Doctor. The series centers on a Time Lord from the planet Gallifrey, known only as The Doctor, as well as her team of friends – Ryan (Tosin Cole), Yasmin (Mandip Gill) and Graham (Bradley Walsh). Guest stars in season 11 include Sharon D. Clarke, Johnny Dixon, Samuel Oatley, Shaun Dooley, Susan Lynch, and Art Malik.

What do you think? Which season 11 episodes of the Doctor Who TV series do you rate as wonderful, terrible, or somewhere between? Should BBC America cancel or renew Doctor Who for a 12th season? Don’t forget to vote, and share your thoughts, below.

Thoroughly pleased with the ‘new’ doctor. I was well impressed with the first 9 episodes in season 11. Unfortunately, I missed episode 10, the finale. I have had no luck finding where I could review it. Any help? I have Direct TV, ATT, Uverse but cannot locate a replay.

BBC need a rethink. A female Doctor okay, three companions, too many. Poor story lines, bad writing and too much preaching. A Doctor who gurns to express emotion, who seems unsure and a completely different character. The core of the Doctor has always been dangerous. This Doctor seems vague and lost as are the writers!

Do not like the latest season of Dr Who. Completely disappointed in “The Doctor” and the episode writing.

Each of the last three episodes has gotten closer and closer to what Doctor Who feels like. The Witchfinders is the first of this season to really feel like Jodie was THE DOCTOR and the companions were actually companions. Stellar cast! Fabulously written!! Even the music was better (not perfect yet but better – less B movie/horror flick and more emotional and interesting. Hoping for more of the latter). Great episode!! Loved the comments about being a woman making it difficult to do her job. Yeah, we got it! Let this great episode mark the end of the witch-hunt on… Read more »

Doctor Who is bigger than one cast, head-writer, and producer. It has meaning beyond one series. We want it to continue forever because it gives so much to the world! That said, It is clear that 1. Chris Chibnall just doesn’t get who The Doctor really is. He should not be the headwriter by any stretch. 2. McTighe is a thousand times better writer for this show. Tons of potential! 3. Oh please get a new composer!! I know how much impact a musical score has on a show or movie. Murray Gold was a genius! He moved us, added… Read more »

I had low expectations but OMG what an abomination. I thought Peter Capaldi was a disappointment but, he was pure genius compared to Whittaker, who was obviously trying to channel David Tennant. Not even close! The scripts under Capaldi were boring & stale. They look to be even worse with Whittaker. As for “the companions” they should bring back the dog. A once legendary franchise is no more. RIP Doctor Who.

Completely disagree. I do think Peter had some weak writing, but he was brilliant as the Doctor. When I heard Whittaker was the new Doctor, I didn’t see it being a good choice. The first episode was AWESOME, and she nailed it. Some people will write her off for being a woman, no matter what she does. Oh well, every single person I know was pleasantly surprised!

The first episode was “AWESOME”? We must’ve been watching a completely different series because it bored me to tears! It has nothing to do with her being a woman and everything to do with the wrong cast doing the wrong scripts.

I partially agree. For some reason there are a lot of people that can’t seem to grip present day. And personally I loved Capaldi! As for the Jodie, you can’t do better than your writer. Chibnall is abysmal! But other writers have been writing and episodes are getting much better; the last one rocked! I wish they would consider bringing back Missy as the Doctor! It’s clear that the Doctor can influence his/her appearance, as he said with Capaldi’s Doctor. There is no reason Michelle Gomez could not be the next Doctor and let’s face it.. She steals every scene… Read more »