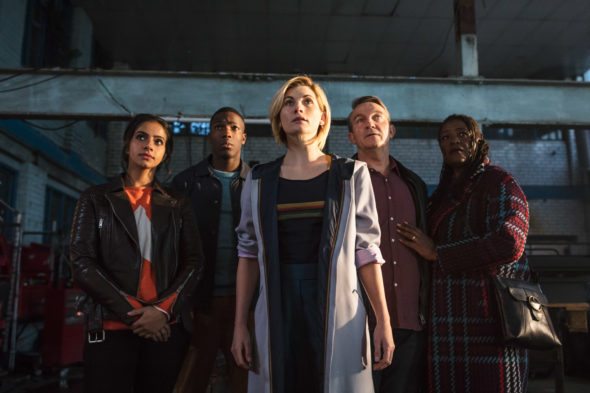 Will the first female incarnation of The Doctor be sticking around for a while? Is the Doctor Who TV show cancelled or renewed for a 12th season on BBC America? The television vulture is watching all the latest cancellation and renewal news, so this page is the place to track the status of Doctor Who season 12. Bookmark it, or subscribe for the latest updates. Remember, the television vulture is watching your shows. Are you?

A BBC America science-fiction drama, the 11th season of Doctor Who stars Jodie Whittaker as the 13th Doctor. The series centers on a Time Lord from the planet Gallifrey, known only as The Doctor, as well as her team of friends – Ryan (Tosin Cole), Yasmin (Mandip Gill) and Graham (Bradley Walsh). Guest stars in season 11 include Sharon D. Clarke, Johnny Dixon, Samuel Oatley, Shaun Dooley, Susan Lynch, and Art Malik.

Since it is primarily a UK TV series, it’s up to the BBC whether Doctor Who is cancelled or renewed for season 12, so its overall continuation depends upon its success across the pond. Still, US ratings are important to ensure Doctor Who is renewed on BBC America. Despite some fan discontent over Whittaker’s casting, the ratings have been way up this season so I have no doubt that Doctor Who will be renewed. I’ll update this page when we have an official announcement. Subscribe for free updates regarding any Doctor Who cancellation or renewal news.

What do you think? Should the Doctor Who TV show have been cancelled or renewed for a 12th season on BBC America? How long do you expect this TV series to run?

Am hoping and am sword of guessing that there we’ll be another season of doctor who and am guessing next year the doctor well regenerates at some point and we well have another doctor some were between 2022 and 2023 and if the doctor dose regenerate who would you want to play the role of the doctor..

They have to get rid of the Lady Dr and take a close look at the writing. Time to dump the Woman’s PC line they have been pursuing with Jodie and get a real hot lady if they have to have one. I’ve been a Dr fan for somewhere around 40 years but the modern direction they took with it just stinks.

Sadly not only did they break canon with having the doctor have 13 regeneration (Anyone remember Rassilon’s safeguards and warning against immortality [The Five Doctors]) but they also flipped sexes which given that there was already female timelords (I miss Romana) seemed totally contrived and pointless. I am sorry to say I did not get past 2 episodes and have no intention of watching any more as it only seems to get even more ludicrous. I hope it just blips out as the anomaly that it is and we are left with 12 perfect regenerations that although some had their… Read more »

They should but won’t cancel, because they can’t admit they were wrong.

My viewing of Dr Who goes back to Tom Baker. Baker, Pertwee, Tennant, and Smith represent what a Dr should be. The changes made during the Pertwee era was what made the modern Dr Who. The trend toward “realism” has little to do with this series. The comedy is farce and farce must be played straight to be effective. Most good series are destroyed by the execs knee jerk reactions-the least little perceived bobble and they appear to freak out instead of looking at the long term.

Speaking for me and my family of “Whovians” Please don’t cancel the show. I prefer male doctors, but Jodie is doing a great job. As for the political stuff mentioned…. It’s a British show with their own idea’s… I can ignore what I don’t agree with, and cheer for those I do. I do that with american shows all the time. I respect those who have left because of the political comments, but really… we face this junk every day on tv, radio, on our jobs, and with the people in our own families. I watched it in the 70’s,… Read more »

Just cancel the show, jodie is a great actress, really she is however its not the same show anymore its more like a bad spin off. The older show had a tiny budget but was great. Bigger budget does not mean better. The PC partrol ruined a great show. Bye bye Doctor who and good riddance to chris.

Dr Who has always been a favorite but I finally stopped watching when Jodie Foster became the Dr . She is along the stories were so very boring I didn’t think I could sit through such boring episodes any longer. She was boring the stories were boring along with the rest of the cast. The secret to a good show is if it works and it is a success then don’t mess with it. You messed with the formula and it doesn’t work. Find a new Dr Who and a new writer or get the old ones back and don’t… Read more »

Please don’t cancel DOCTOR WHO. It’s my favoret show. Just because a woman is playing the doctor shouldn’t make any different. Sex doesn’t matter. (And I’m female) you need to treat the actors with respect whether they are male or female it doesn’t matter. Thank you for your time. Jodie Whittaker is the best doctor you have ever had do not make any silly desision. I want it to stay. Also try not to ruin the show.

(Very worried and concerened about this issue)

Its not she is female…most Whovians would love to watch a female time lord…hell, give us Clara Oswald with the story styles of Smith or Tennant’s style and loads would be watching. What people are hating is the preachy non-stories and nearly 100% political overt agenda being pushed that has crippled this franchise. The worst scenario happened…you can have some veiled politics in a show…but they took the veil off and its now just a weekly sermon on how the far left political idealism is good and western ideals overall are just horrible. Cancel this..or fire all the writers, director,… Read more »

I completely agree with you. Jodie Whitaker is wonderful. Get better writers and directors and for God’s sake, please stop with the politically correct crap and just give us a great story. My friends and I have no problem with the Doctor, but the story arc is awful.

This abysmal season is unwatchable. Fire Chibnall, Whittaker and all of the writers and start again or put it out of its misery. Boring stories with a clear agenda by the writing staff to attract a new audience at the cost of long term fans. It’s not fun, charming or scary. My friends and I have given up on it. I hung in for four episodes and could not stomach it any longer. My friends didn’t even last that long. We have been watching since the 70’s and yes, there have been bad episodes and even seasons…but nothing comes close… Read more »

The Jodi Whittaker doctor is literally a social justice warrior. Someday the people controlling the Hollywoods of the world will realize that the vast majority of audiences do NOT like being lectured. In any case my Mrs and I made it exactly as far as you did which was the “We Hate Donald Trump” episode aka “Arachnids in the UK”. Totally done with it now.

I think new Dr who is doing great. It feels like its still him/her. With a whole new regeneration new emotions,cravings and way of talking trying to mesh with trends of the day. From Matt Smith “who’s the man?” “I am never saying that again”. Now Jodi Whittaker’s. “Dude” “yes I say dude now”. To most recent homage to the past lives of the Dr being remembered more now with each new body. From Peter capaldi having a photo of Susan. To Jodi grabbing the fez and showing her fond memories of it “does it still suit me”. Using capaldi… Read more »