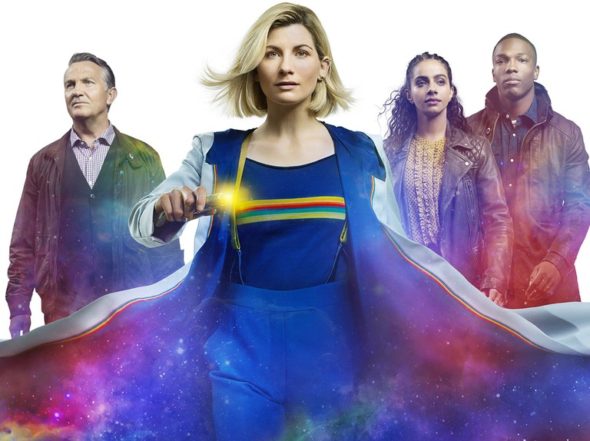 Doctor Who fans are going to have their new year start off right. Season 12 of the series will premiere on New Year’s Day before heading off to a Sunday time slot on January 5. The return was announced with the release of the first trailer for the upcoming season. The new season features the return of Jodie Whittaker as the doctor.

BBC America revealed more about the return of the series with a press release. Check that out below.

“BBC AMERICA’s hit action-adventure series, Doctor Who, is back! Kicking off 2020, the Thirteenth Doctor (Jodie Whittaker) returns with the launch of the latest season on Wednesday, January 1 at 8pm ET/PT, resuming her time-and-space travels with friends Ryan (Tosin Cole), Yasmin (Mandip Gill) and Graham (Bradley Walsh). Subsequent episodes will air Sundays at 8pm ET/PT beginning January 5 on BBC AMERICA. Starting with a blockbuster, action-packed two-part episode entitled Spyfall, the Thirteenth Doctor is well and truly back with a bang.

BBC AMERICA also released today the official global trailer for Jodie Whittaker’s second season as the Doctor, which introduces terrifying new monsters alongside the return of some familiar but not-so-friendly faces.

Following the show’s return on New Year’s Day, BBC AMERICA has partnered with BBC Studios and Fathom Events to bring Doctor Who back to the big screen on Sunday, January 5. This one-day-only special event, featuring the premiere episode and an exclusive early unveiling of the second episode of the new season, will be simulcast to over 600 cinema screens nationwide. After the screening, audiences will be treated to a LIVE Q&A with Jodie Whittaker, Tosin Cole, and Mandip Gill, transmitted from The Paley Center for Media in New York. Tickets and a list of participating locations will be available beginning Friday, December 6 at the Fathom Events website.

Said BBC AMERICA Executive Director Courtney Thomasma, “What better way to ring in a new decade than with our favorite Time Lord? BBC AMERICA is excited to kick off the New Year with New Who, including a thrilling New Year’s Day premiere followed by new episodes every Sunday this winter. Last year, thousands of Whovians packed Madison Square Garden to celebrate Jodie Whittaker’s landmark debut as the first female Doctor. This year, we’re thrilled to partner with Fathom Events to bring that unique experience to fans all across the country, as Doctor Who embodies the idea of space for all. Let the New Year’s countdown begin!”

Previously announced guest stars for the thrilling new season of Doctor Who include British institution Stephen Fry (The Hitchhiker’s Guide to the Galaxy, A Bit of Fry and Laurie), Sir Lenny Henry CBE (Broadchurch, Harry Potter and the Prisoner of Azkaban), Goran Vi�njic (ER, Timeless) and Robert Glenister (Paranoid, Law and Order: UK).

Fans will be able to enjoy Doctor Who for a week straight leading into premiere night, with a takeover event on BBC AMERICA of full seasons and specials with all the modern Doctors – Christopher Eccleston, David Tennant, Matt Smith, Peter Capaldi and Jodie Whittaker – from Tuesday, December 24 through Wednesday, January 1. In addition, the network will also debut animated “lost episodes,” titled “The Macra Terror,” as a special post-holiday treat on Thursday, December 26th at 9pm ET/PT.

Doctor Who is executive produced by showrunner Chris Chibnall and Matt Strevens. The series is a BBC AMERICA co-production with BBC Studios.”

What do you think? Are you a fan of Doctor Who? Do you plan to watch the new season?

I doubt it. The writing is terrible these days.

glad its finally back, as well as the hopefully not so preachy episodes, ,and familiar bad guys , last season was ok at best, love jodi whittaker , but the season was nothing more than sjw propaganda , nothing wrong with diversity/equality,etc. just not every episode