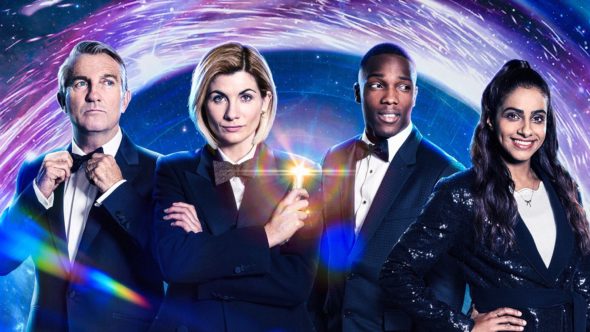 Doctor Who is not breaking its annual tradition and an old foe is returning. Fans of the series will see a new special on BBC America this holiday season. Jodie Whittaker is still the time-traveling doctor on the series and the actress made it clear earlier this year she didn’t plan on leaving soon.

A release date hasn’t been revealed for the Doctor Who holiday special but the following was revealed:

“This one-off holiday season special, entitled “Revolution of the Daleks,” will see the return of one of the Doctor’s biggest and most feared enemies – the Daleks. Doctor Who stars Jodie Whittaker as the Doctor, Tosin Cole as Ryan, Bradley Walsh as Graham and Mandip Gill as Yaz.”

In addition, an animated Doctor Who special, which draws on material from the fourth season of the show’s original run, is set to air in October. BBC America revealed more about the animated special:

“Doctor Who: The Faceless Ones

The Faceless Ones is the mostly missing eighth serial of the fourth season of Doctor Who, which was first broadcast in six weekly parts from April to May 1967, starring Patrick Troughton as the Doctor. Only two of the six episodes are held in the BBC film archives with snippets of footage and still images existing from the other four. Fortunately, off-air recordings of the soundtrack also still exist, making the animation of a complete serial possible once again. The Faceless Ones sees the TARDIS arrive on Earth at a runway at Gatwick Airport in England, where the Doctor and his companions encounter sinister identity-stealing aliens known as the Chameleons.”

What do you think? Are you a fan of Doctor Who on BBC America? Do you plan to watch these upcoming specials?

One of my favorite shows few years watch it saw original tv show seem way better not alive when on air remake so cool love watch every year need to end tired of it getting old.

I have been a doctor who fan for several years, a big fan. However in the last 2 years the stories have been terrible and so I finally decided to stop watching it. what really got me was when we were supposed to wait 8 months for a new season. Now I know that there’s a new showrunner since Peter capaldi’s doctor. Maybe bring the past showrunner back for a few episodes. I don’t have a problem with Jody Whitaker, I don’t have a problem with her having three companions, but please get better storylines I agree with the other… Read more »

love doctor who, started watching a LOOONG time ago, when i was 9 or 10 when you could see it on PBS, love the “new” incarnation as well that started with chris eccleston, jodi whittaker is a decent actress, BUT , the last 2 seasons, have been more political slaps in the face ( yes i know dr who was always a bit political, just not almost EVERY episode )than good sci-fi stories,the writing has fallen off, the daleks showed up in last years “special”now this years as well, are they ONLY going to be in the “specials” they should… Read more »

IDK, the writing has been going downhill since Peter Capaldi’ s series. Also why change Christmas Special to Holiday Special?