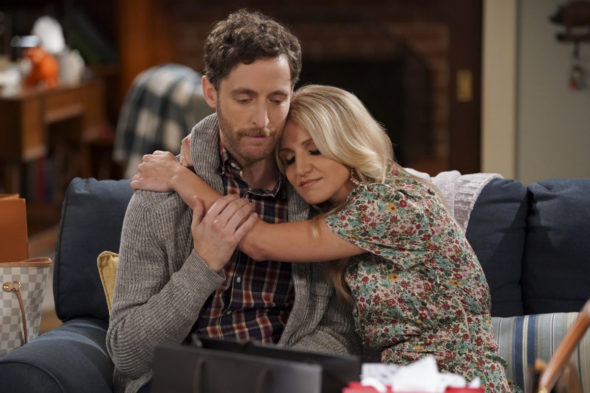 Is Gina ready for her new role? Has the B Positive TV show been cancelled or renewed for a third season on CBS? The television vulture is watching all the latest cancellation and renewal news, so this page is the place to track the status of B Positive, season three. Bookmark it, or subscribe for the latest updates. Remember, the television vulture is watching your shows. Are you?

Airing on the CBS television network, the B Positive TV show stars Annaleigh Ashford, Thomas Middleditch, Kether Donohue, Sara Rue, Izzy G., Terrence Terrell, Linda Lavin, David Anthony Higgins, and Darryl Stephens with Hector Elizondo, Jane Seymour, Ben Vereen, Jim Beaver and Anna Maria Horsford recurring. The story begins with Drew (Middleditch), a therapist and newly divorced dad, who is in need of both a new kidney and a social life. He runs into Gina (Ashford), a rough-around-the-edges former high school acquaintance who volunteers one of her own kidneys. Together, Drew and Gina form an unlikely and life-affirming friendship. During the process, Gina discovers that the happiness she’d been seeking all along could be found in the form of giving. In season two, Drew starts his new life with Gina’s healthy new kidney. Meanwhile, Gina inherits a surprise fortune from a patient at Valley Hills, the assisted living facility where she works, and this leads her to make a big change in a positive direction.

The second season of B Positive averaged a 0.44 rating in the 18-49 demographic and 4.48 million viewers in the live+same day ratings (includes all DVR playback through 3:00 AM). Compared to season one, that’s down by 21% in the demo and down by 4% in viewership in the live+same day ratings (including DVR playback through 3:00 AM). While these numbers don’t include further delayed or streaming viewing, they are a very good indicator of how a show is performing, especially when compared to others on the same channel. Though other economic factors are involved, the higher-rated shows usually get renewed and the lower-rated ones get cancelled. Find out how B Positive stacks up against other CBS TV shows.

Will CBS cancel or renew B Positive for season three? Last season, this sitcom was one of the network’s lower-rated comedies but still did pretty well compared to other shows. Once CBS comedies get established, they tend to have long runs — the trick is to survive past a first or second season (The Unicorn comes to mind). In its second season, B Positive ranks 15th out of 20 scripted shows so, I think it could be cancelled. I’ll update this page with breaking developments. Subscribe for free alerts on B Positive cancellation or renewal news.

What do you think? Were you hoping that the B Positive TV show would be renewed for a third season? Are you sorry that CBS cancelled this TV series, instead?

Loved the show! don’t cancel it!! Everybody I talk to is mad about that!

You for canceling this it was intolerable

I’m very unhappy that B positive has been cancelled. I watch very little TV anymore. And to cancel such a good show just shows that CBS doesn’t care what their veiwers want to watch.

Very sad to see B Positive go…. Loved the actors and the laughs. We need more shows that make us laugh like this one.

B Positive was really heading in the right direction after the nursing home became the main theme. The characters were developing and it was funny. They cut this and leave Ghosts? I turn Ghosts off and come back. You guys have cut a nice show

Gost is starting to get as good as B Positive

So upset about B Positive being cancelled!!! It’s my favorite show!!! Are there any attempts for it to be picked up by other networks? I would gladly support the effort. This show’s cast and writers are so good at blending great comedy w difficult topics. It’s thoroughly enjoyable and it’s been great to see Linda Lavin, Jane Seymour, Ben Vereen, DB Sweeney, Hector Elizondo, etc again- they’re so talented and entertaining!! The entire cast has great chemistry!!! There’s not a character that I didn’t like. Please bring this show back!!!!

The show was one of the best comedies in all of TV land. I just pray another network will pick it up. The loss of this show (Be Positive) and the United States of Al are two shows that CBS had in place on Thursday night are two shows that needed to be renewed. It reminded me of the Seinfeld days when it was much watched TV.

Love this show…so funny and real.