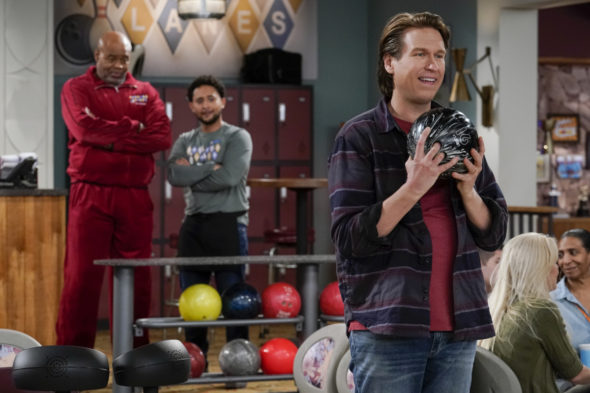 Can this comedy pick up a spare (season)? Has the How We Roll TV show been cancelled or renewed for a second season on CBS? The television vulture is watching all the latest cancellation and renewal news, so this page is the place to track the status of How We Roll, season two. Bookmark it, or subscribe for the latest updates. Remember, the television vulture is watching your shows. Are you?

Airing on the CBS television network, the How We Roll TV show is based on the life of professional bowler Tom Smallwood. It stars Pete Holmes, Katie Lowes, Chi McBride, Julie White, and Mason Wells with Tahj Mowry, Rondi Reed, Judy Kain, Amanda Perez, and Matt McCarthy in recurring roles. In the story, Tom (Holmes) is a stoic husband and dad from the Midwest who gets laid off from his job on a car assembly line. He makes the extraordinary decision to provide for his family by finally following his dream of becoming a professional bowler. As a skilled player, Tom knows that in bowling you get two chances; no matter what you do with the first ball, you get another one to make it right—the ultimate second chance. Keeping that in mind, Tom begins his new career with the okay from his loving wife, Jen (Lowes); the unfaltering support of Archie (Mcbride), his mentor and the proud owner of Archie’s Lanes: Home of the Curly Fry; the cautious backing of his protective mom, Helen (White); and the encouragement of his son, Sam (Wells).

The first season of How We Roll averaged a 0.34 rating in the 18-49 demographic and 3.45 million viewers in the live+same day ratings (including DVR playback through 3:00 AM). While these numbers don’t include further delayed or streaming viewing, they are a very good indicator of how a show is performing, especially when compared to others on the same channel. There can be other economic factors involved in a show’s fate, but typically the higher-rated series are renewed and the lower-rated ones are cancelled. Find out how How We Roll stacks up against other CBS TV shows.

Will CBS cancel or renew How We Roll for season two? The network has high standards for its comedies when it comes to ratings and CBS has just six timeslots to fill. How We Roll has a good lead-in with Ghosts but the ratings are pretty low. I suspect that it will be cancelled.  I’ll update this page with breaking developments. Subscribe for free alerts on How We Roll cancellation or renewal news.

What do you think? Were you hoping that the How We Roll TV show would be renewed for a second season? How do you feel that CBS cancelled this TV series, instead?

Well I thought it was streaming show when they stream you can watch when you want not when the networks tell you to watch, it was a cute show I Eben got my husband to watch 🙁 way to go cbs