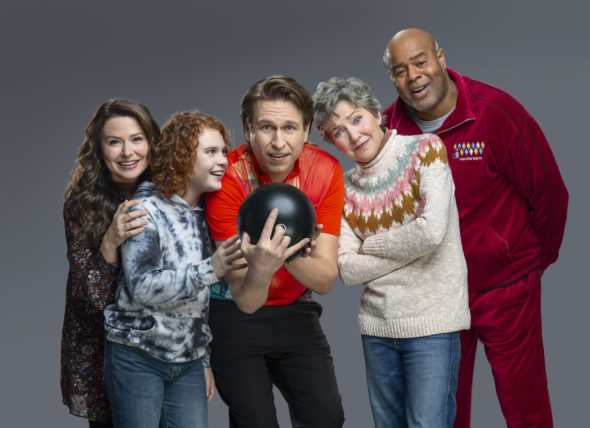 TV show description:
A comedy series, the How We Roll TV show is based on the life of professional bowler Tom Smallwood.

In the story, Tom Smallwood (Holmes) is a stoic husband and dad from the Midwest who gets laid off from his job on a car assembly line. He makes the extraordinary decision to provide for his family by finally following his dream of becoming a professional bowler.

As a skilled player, Tom knows that in bowling you get two chances; no matter what you do with the first ball, you get another one to make it right—the ultimate second chance. Keeping that in mind, Tom begins his new career with the okay from his loving wife, Jen (Lowes); the unfaltering support of Archie (Mcbride), his mentor and the proud owner of Archie’s Lanes: Home of the Curly Fry; the cautious backing of his protective mom, Helen (White); and the encouragement of his son, Sam (Wells).

Can Tom strike it big on the Pro Bowler circuit? We’ll have to wait and see but, for now, the pins are set, he’s taking his second shot and it’s 300 or bust.

Series Finale:
Episode #11 — The Big One
When Tom’s mentor and coach, Archie, suffers a heart attack just days before the World Series of Bowling, Tom struggles with whether to stay with him in the hospital or leave to compete in the biggest tournament of his career.
First aired: May 19, 2022.

What do you think? Do you like the How We Roll TV show? Do you think it should have been cancelled or renewed for a second season?

This show was just hitting stride. The characters personalities we’re just coming out. GREAT show. Don’t think it was given a good enough chance to succeed. Sad…

More dull than B Positive, and I didn’t think that was possible. I had such high hopes

Not funny at all, characters not interesting. Story line boring.

not bad but needs to improve….. interesting premise….

It was not funny. I know this could be so writers, step it up.