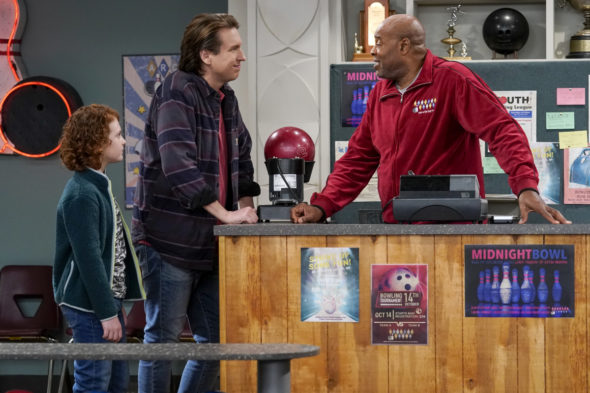 Another comedy has been knocked down. CBS has cancelled How We Roll so it won’t be back for a second season. The first season of 11 episodes will finish airing on May 19th.

A comedy series, the How We Roll TV show is based on the life of professional bowler Tom Smallwood. It stars Pete Holmes, Katie Lowes, Chi McBride, Julie White, and Mason Wells with Tahj Mowry, Rondi Reed, Judy Kain, Amanda Perez, and Matt McCarthy in recurring roles. In the story, Tom (Holmes) is a stoic husband and dad from the Midwest who gets laid off from his job on a car assembly line. He makes the extraordinary decision to provide for his family by finally following his dream of becoming a professional bowler. As a skilled player, Tom knows that in bowling you get two chances; no matter what you do with the first ball, you get another one to make it right—the ultimate second chance. Keeping that in mind, Tom begins his new career with the okay from his loving wife, Jen (Lowes); the unfaltering support of Archie (Mcbride), his mentor and the proud owner of Archie’s Lanes: Home of the Curly Fry; the cautious backing of his protective mom, Helen (White); and the encouragement of his son, Sam (Wells).

The first season of How We Roll averages a 0.34 rating in the 18-49 demographic and 3.52 million viewers in the live+same day ratings (including DVR playback through 3:00 AM). It’s one of CBS’ lowest-rated series of the season overall. Delayed viewing didn’t bring any better news. In the live+7 day ratings, which includes a week of delayed viewing, How We Roll averages just a 0.40 demo with 4.55 million.

In the past 24 hours, CBS has also cancelled B Positive, Good Sam, Magnum PI, and United States of Al.

What do you think? Have you checked out the How We Roll comedy series on CBS? Are you sad to hear that this TV show has been cancelled and won’t return for a second season?

I cannot believe that CBS is canceling this show. It was becoming one of my favorite shows to watch. I do hope it is picked up by another network. Oh well..no reason to watch CBS anymore

I’m so disappointed that this show was canceled. I hope another vehicle is soon found for the talented Pete Holmes.

This show would have been better if comedian/lead could ‘act’ funnier. Chi was the best part of the show. Sad to see it go, but not at all surprised.

Cancelling this show was a mistake. At first, I lumped this into “Call me Kat” territory, but the show developed into a pleasant diversion, and Chi McBride,was an interesting choice as his mentor. Kate Lowes is a delight, as always. This show should have been given more time.

It was OK and I always love the talented Katie Lowes.

I am an avid bowler, so I was excited about the show. I’m also a former radio/TV person. Whenever I was asked to critique a pilot program, I was usually pretty good at knowing if it would make it or not. Despite my love of bowling, I watched one episode of HWR, and knew it was doomed. It would be more interesting if everyone would offer details on why they didn’t like it or didn’t continue watching. For me: Not enough bowling!

I could only watch one episode due to the “laugh track”. I just couldn’t watch or listen to the not so funny laughing. I imagine others have their own reason why it didn’t work well at all. Hope this helps to understand my reasons. Good luck.

i am sad to see”how we roll”was canceled..i give them credit for trying..pete holmes is a good actor and it had a good cast maybe another network will pick it up

Not a great show at all. The derogatory comment about the dentist being in AA tonight, was awful.

I expected it. It stunk.