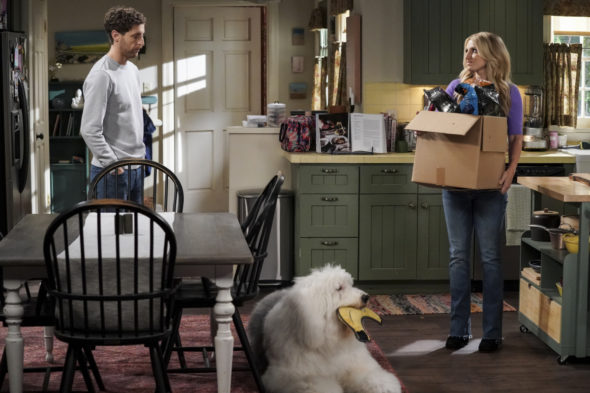 Gina and Drew won’t be back for the 2022-23 television season. CBS has cancelled B Positive so it won’t see a third year. Fellow Thursday night sitcom United States of Al, also produced by Chuck Lorre, was cancelled last night.

A comedy series, the B Positive TV show stars Annaleigh Ashford, Thomas Middleditch, Kether Donohue, Sara Rue, Izzy G., Terrence Terrell, Linda Lavin, David Anthony Higgins, and Darryl Stephens with Hector Elizondo, Jane Seymour, Ben Vereen, Jim Beaver and Anna Maria Horsford recurring. The story begins with Drew (Middleditch), a therapist and newly divorced dad, who is in need of both a new kidney and a social life. He runs into Gina (Ashford), a rough-around-the-edges former high school acquaintance who volunteers one of her own kidneys. Together, Drew and Gina form an unlikely and life-affirming friendship. During the process, Gina discovers that the happiness she’d been seeking all along could be found in the form of giving. In season two, Drew starts his new life with Gina’s healthy new kidney. Meanwhile, Gina inherits a surprise fortune from a patient at Valley Hills, the assisted living facility where she works, and this leads her to make a big change in a positive direction.

The show ended its run in March, having produced a total of 34 episodes across two seasons. In the past 24 hours, CBS has also cancelled Good Sam, How We Roll, and Magnum PI.

What do you think? Have you watched the B Positive TV show on CBS? Are you sorry to hear that the network has cancelled this sitcom so there won’t be a third season?

Great show and a super break from all the CSI etc.

It was an OK watch but they did stretch things out rather thinly in the end.

This show was such a good comedy show, with good stars. The March finale left the plot unfinished, and we expected the show to return in the fall, rather than just a continued accumulation of crime dramas, like more FBI or NCIS episodes.

I absolutely loved this show. It’s a shame that a good funny sitcom gets cancelled and all the reality shows seem to not only stay put but grow in numbers. Shame on you CBS.

We loved B Positive……so sad it wasn’t renewed. All the cast were great!