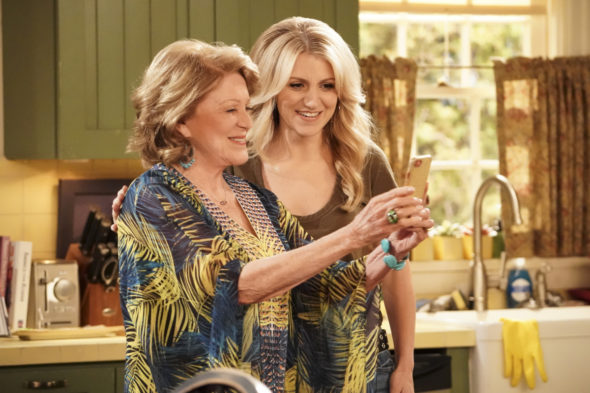 Executive producer Chuck Lorre said the following about the second season of the CBS comedy, per Deadline:

“Having donated a kidney and saved a man’s life, Gina (Ashford) has learned that happiness is in the giving, not the getting. She puts this principle to work by trying to improve the lives of the elderly residents of Valley Hills, the assisted living facility where she’s been working. In the meantime, Drew (Middleditch) is struggling with a strange new feeling. Post-surgery, he’s convinced he’s in love with Gina. It’s complicated.”

The following was also revealed about the new additions to the cast of B Positive:

Seymour is Bette, an aging beauty who is incapable of coming to terms with her senior status.

Weston portrays Meredith, dealing with her terminal illness as best as she can while trying to help her husband, Harry, move.

Beaver is Spencer, former NYPD transit cop, was a 9/11 first responder. Politically and socially, he finds it difficult to behave appropriately.

Horsford plays Althea Ludlum, the no nonsense administrator of Valley Hills. She’s a thorn in Gina’s side, but Gina needs help running the place.”

B Positive returns with season two on October 7th.

What do you think? Are you excited about the return of B Positive to CBS?

As B+ Kidney donor to my husband, we do NOT find the show funny nor entertaining. How about a show that makes heart by-pass surgery a comedy, or dealing with diabetes a comedy.This show degrades both donors and recipients. If anything, it discourages people from transplant donation. I’m appalled that the idea of the show came from someone who is a transplant recipient. Obviously this very wealthy person didn’t go through the transplant difficulties that most transplant patients go through. This show is a disgrace and should be canceled. TV has reached a new low with this show. What’s next… Read more »

I have CKD Stage IIIB. I also have cancer. I find the program uplifting. Being ill and having chronic conditions are not easy. Comedy helps in many ways. The show does NOT discourage anyone from transplant donation. We do need to B+ about life. That is one thing that is keeping me going. Did I forget to mention that I lost a beloved granddaughter on Christmas morning two years ago? Yes, I cried again earlier about missing her. Perhaps the person(s) who thought of the show and the writers understand that life goes on and we do need to look… Read more »

Love the show and the characters. But found a major technical flaw in S2. E1. Bequests are NOT taxable. So,Gina is richer than she thinks she is. Not sure how the writers missed this very clear error, but it is misleading. Gary, CPA

My husband and I watched last year and found the show funny. Recently we found his kidneys are not doing well although. He is no where needing dialysis or a transplant but I am wondering if we will find it as funny. I hope so. Looking forward to the new characters in the show.

My husband and myself just love this show, we hope it continues for a long time Great actors and storylines, please keep it coming.

SO HAPPY ! Love this show,Gina is a hoot.

What a waste of time

Carla
Reply to  Today is now

I agree with you. This show is awesome, a great sitcom!

This show is very strange but funny and expeciallly I love Linda Lavin.

I love this show. New humor and the gal who plays Gina is genius. I would have been upset if it was canceled. I’m a 76 year old grandma with cancer, ad this show is the highlight of my week!