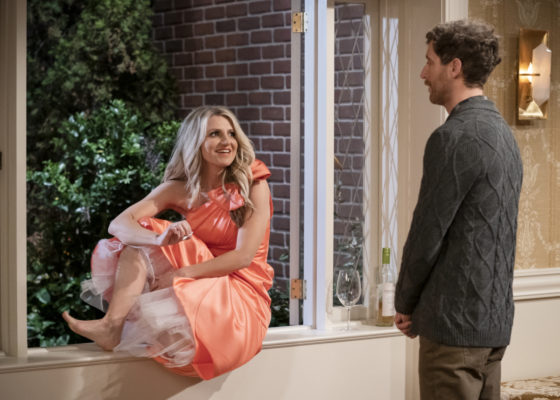 Viewers will get to see more of the relationship between Drew and Gina in the 2021-22 television season. CBS has renewed the B Positive TV show for a second year.

A comedy, the B Positive series stars Thomas Middleditch, Annaleigh Ashford, Kether Donohue, Sara Rue, Izzy G., and Terrence Terrell. The story revolves around a man with B-positive blood who needs an organ transplant and finds an unlikely match. Drew (Middleditch) is a therapist and newly divorced dad who is in need of both a new kidney and a social life. He runs into Gina (Ashford), a rough-around-the-edges former acquaintance from his past who volunteers one of her own kidneys. Together, Drew and Gina form an unlikely and life-affirming friendship, as they begin a journey that will forever affect both of their lives.

Airing on Thursday nights, the first season of B Positive averaged a 0.55 rating in the 18-49 demographic and 4.65 million viewers in the live+same day ratings. The 13th and final episode of season one finished airing this week.

Check out our CBS status sheet to track the Tiffany network’s new series pickups, renewals, and cancellations. You can find lists of cancelled shows here.
What do you think? Do you enjoy the B Positive TV show on CBS? Will you be watching the second season?

I think this is a very entertaining comedy dealing with some sensitive issues and featuring very talented likeable performers. The female lead’s stage experience is obvious–she’s awesome.

We’re thrilled it got renewed. Love all the actors, and so far they have written good stories, Love the show, keep it going.

I love this show. The characters are a hoot. I couldn’t be happier it’ll be returning.

I love this show! Gina is hysterical. Her ability to pull Drew out of his shell is a great reminder that friendship can be such a wonderful thing.

YES! so happy this is coming back! it’s funny,yet it shows you the real side to kidney disease/dialysis.

This show is one of many bad sitcoms today. Seems like the good ones get cancelled and stupid ones like this one stay.

learning about kidney disease and dialysis in a funny way is bad…ooooook….

Boy, today’s television is so innovative. However, I can trace this show’s origins back to the episode of Jake and the Fatman where Jake got Chlamidia and the Fatman died of AIDS. I can’t spell Chlamidiya.

Yes, we love it. I’m a kidney transplant recipient myself. Deceased donor.

So glad it was renewed. Love the show

Me too! Glad they had enough sense to keep it going!

I don’t like the main characters. The dialysis crew are funnier and more interesting.

I love the two main characters.

Woohhoooo!!!! I absolutely love this show! SO glad it was renewed!!!

Junkie? wow…the main idea of the show is a man has kidney disease and needs a new kidney,which the woman hee took in is going to give him,but in the meantime he has to be on dialysis