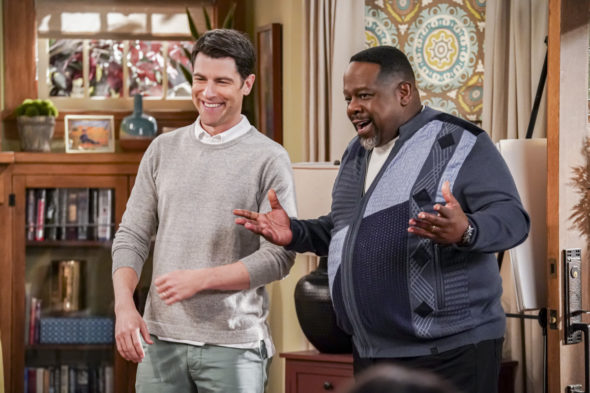 More laughs are coming to The Neighborhood for 2021-22. CBS has renewed the Monday night sitcom for a fourth season.

The Neighborhood stars Cedric the Entertainer, Max Greenfield, Sheaun McKinney, Marcel Spears, Hank Greenspan, Tichina Arnold, and Beth Behrs. This sitcom begins when a very friendly guy and his family — professional conflict negotiator Dave Johnson (Greenfield), school principal Gemma (Behrs), and their young son, Grover (Greenspan) — move to a community in Los Angeles that’s quite different from their Michigan small town. Their opinionated next-door neighbor is Calvin Butler (Cedric the Entertainer), a family man who’s wary of the newcomers. However, Calvin’s family feels very differently. His gracious wife, Tina (Arnold), rolls out the welcome wagon while sons Marty (Spears) and Malcolm (McKinney) think the Johnsons will be good for their family and the community. Despite their differences, the Johnsons and Butlers find a way to become true neighbors and maybe even friends.

The third season of The Neighborhood averages a 0.82 rating in the 18-49 demographic and 5.78 million viewers. Compared to season two, that’s down by 9% in the demo and down by 7% in viewership. Eight of the season’s 18 episodes have aired thus far. The show will have a shorter-than-usual season due to the pandemic and production delays.

What do you think? Do you enjoy watching The Neighborhood TV series on CBS? Will you be tuning in for season four?

When is season 4 coming? We all are waiting

I look forward to both these shows every week and am excited when my DVR has new episodes on it.

We love watching this show, but i’m sure only playing ONE new show a MONTH isn’t helping any of the good comedy’s ratings. We are getting really tired of looking forward to a new show weekly then only seeing a re-run. Please play more new shows, weekly, we miss our comedy’s.

The interruptions are because it takes twice as long to make an episode because they have to follow Covid protocols. It’s annoying, but every CBS show is having to stretch out their shorter episode orders.

CBS actually needs to start planning CANCELATIONS since most shows only had orders for 16 episodes and those are in the back-third of production – shows deserve REAL final episodes if the network is going to pull them.

S.W.A.T, BULL and NICS:NEW ORLEANS are in trouble ratings wise, and BLUE BLOODS always is left for the last minute!

But if you look at the other side of the networks shows they’re not doing well either even the so-called doing well episode series are really low why because people are tired of this the same sitcom same genre same everything is just has different titles but with the same producer. This is getting old in lotta the shows on this network or nothing but rearranged previously thought about series and just re-formatted intoNew series. Hence this network needs to start rethinking what they are ideology is about what they’re trying to produce I try to be politically correct do… Read more »