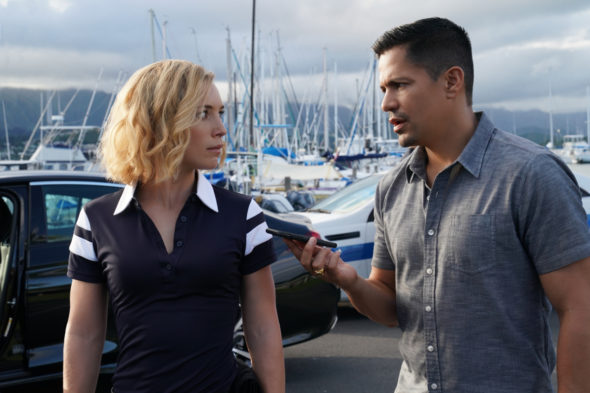 Magnum and Higgins will keep sparring into the 2021-22 television season. The CBS network has renewed the Magnum PI series for a fourth year.

An action-adventure series, Magnum PI stars Jay Hernandez, Perdita Weeks, Zachary Knighton, Stephen Hill, Tim Kang, and Amy Hill. This reboot of the 1980s TV show follows Thomas Magnum (Hernandez), a decorated former Navy SEAL who repurposes his military skills to become a private investigator. He lives in a guest cottage on Robin’s Nest, the luxurious estate where he works as a security consultant to supplement his P.I. business. The “majordomo” of the property is Juliet Higgins (Weeks), a beautiful and commanding disavowed MI:6 agent who keeps Magnum in line. When Magnum needs back-up on a job, he turns to his trusted buddies and fellow POW survivors, chopper pilot Theodore “TC” Calvin (Hill) and Orville “Rick” Wright (Knighton), a former Marine door-gunner who now runs a nightclub. Magnum frequently has run-ins with police detective Gordon Katsumoto (Kang) and the two are more alike than either cares to admit. The unofficial “House Mom” and cultural curator of Robin’s Nest, Teuila “Kumu” Tuileta (Hill) is also one of Magnum’s biggest fans.

Airing on Friday nights, the third season of Magnum PI averages a 0.53 rating in the 18-49 demographic and 5.66 million viewers in the live+same day ratings. Compared to season two, that’s down by 19% in the demo and down by 15% in viewership. In the traditional ratings, the show ranks 12th out of this season’s 24 scripted CBS series in the demo but is eighth in overall viewers.

What do you think? Have you been enjoying the Magnum PI reboot on CBS? Are you looking forward to the fourth season of this action-adventure series?

From a faithful watcher … Magnum P. I. is WELL ACTED, WELL WRITTEN, with interesting story lines. Shouldn’t be cancelled. WORK THINGS OUT !

I look forward to Friday evenings knowing that Magnum PI will be coming on. I can only hope that CBS continues to renew the show for the near future. I really like the cast and the chemistry they appear to have. Here is to another 4 seasons!

The constant drum pounding and music background does Not add to Magnum. It makes tremendous difficulty to hear hear what is being said especially when there are 3 situations going on at the same time. Forever Fan No more.

I was a follower of Magnum PI was on with Tom Seleck but I am now a big follower of the new Magnum. I really like all the characters in the show especially Jay Hernandez. I feel so good after I watch and episode. All summer I watched the reruns over and over. I didn’t care how many times I had seen each episode I still enjoyed watching them. For me it is a feel good show. A big thank you to all the people involved in this show.

I love this show more and more. It is always interesting, funny, and very entertaining. I record them and watch them when nothing I really care for is on. In my opinion it’s the best show on TV. I actually buy products advertised on it to encourage advertise on it. This is my favorite show over all the rest.

No, I do not like the reboot of Magnum PI. Jay Hernandez should have been given a chance at another more original series. Magnum PI was about the struggle of the American Vietnam Veteran. There were never any POWs in Afghanistan. The occupation in Afghanistan had more friendly fire incidents than most military engagements. This series proves Hollywood is running on fumes as far as creativity is concerned. Mr. Hernandez deserved more. Tom Selleck will always be the only true Thomas Magnum. I hope this series is not renewed for a 5th or 6th season.

I love Magnum PI with Jay Hernandez. It is my favorite show. I hope to see it back for next season. I like the fact he acts like a normal person. I like that he doesn’t pan the camera with a silly or cheesy face like Tom Selleck did. It is my number one favorite show on air. If they cancel it I will boycott the network and what ever they replace it with.

love magnum better than original. keep it around for at least 3 more seasons if not more

Love this series! So pleased they have renewed the show.