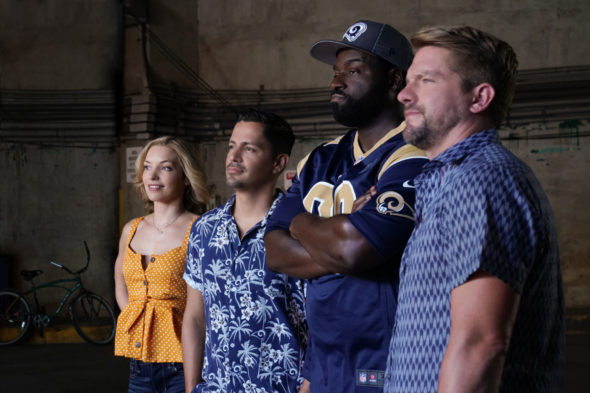 Can this reboot win over fans of the original series? Has the Magnum PI TV show been cancelled or renewed for a third season on CBS? The television vulture is watching all the latest cancellation and renewal news, so this page is the place to track the status of Magnum PI, season three. Bookmark it, or subscribe for the latest updates. Remember, the television vulture is watching your shows. Are you?

Airing on the CBS television network, Magnum PI stars Jay Hernandez, Perdita Weeks, Zachary Knighton, Stephen Hill, Tim Kang, and Amy Hill. This reboot of the 1980s TV show follows Thomas Magnum (Hernandez), a decorated former Navy SEAL who repurposes his military skills to become a private investigator. He lives in a guest cottage on Robin’s Nest, the luxurious estate where he works as a security consultant to supplement his P.I. business. The “majordomo” of the property is Juliet Higgins (Weeks), a beautiful and commanding disavowed MI:6 agent who keeps Magnum in line. When Magnum needs back-up on a job, he turns to his trusted buddies and fellow POW survivors, chopper pilot Theodore “TC” Calvin (Hill) and Orville “Rick” Wright (Knighton), a former Marine door-gunner who now runs a nightclub. Magnum frequently has run-ins with police detective Gordon Katsumoto (Kang) and the two are more alike than either cares to admit. Teuila “Kumu” Tuileta (Hill) is one of Magnum’s biggest fans and is also the unofficial “House Mom” and cultural curator of Robin’s Nest.

The second season of Magnum PI averaged a 0.65 rating in the 18-49 demographic and 6.66 million viewers. Compared to season one, that’s down by 27% in the demo and up by 11% in viewership. Find out how Magnum PI stacks up against other CBS TV shows.

Will CBS cancel or renew Magnum PI for season three? Even if the ratings fall, I think this reboot will still be renewed. I’ll keep an eye on the ratings and update this page with breaking developments. Subscribe for free alerts on Magnum PI cancellation or renewal news.

5/6/20 update: Magnum PI has been renewed for a third season.

What do you think? Are you glad that the Magnum PI TV show was renewed for a third season? How would you feel if CBS cancelled this TV series, instead?

Great show, the setting is beautiful and a great advertisement for the beautiful state of Hawaii!

I love the show, pls do not cancel

Loved this show when Tom Sewickley was Magnum, and also enjoy the new one.
The actors are wonderful.

I loved this show when it first started with Tom Seleck, and the newest is also great. Love them both.

Love the show ,albeit a bit cheesy , but find it very enjoyable viewing! ! Higgys gorgeous !!!!

I love watching Magnum PI. The cast’s chemistry is great. Higgins is an intelligent, kick-ass lady that pairs well with Magnum. I watched the 1980’s PI Magnum. I think I like this one better.

The writers seem to be pretty good. As long as they keep the show interesting there is no reason to cancel the franchise. I hope CBS doesn’t get spooked easily by an occasional ratings dip. All shows go through that. I think Magnum 2.0 might actually beat out the original in syndication.

Couldn’t care less. There’s only one Magnum…Tom Selleck. These reboots like Magnum and MacGyver (I feel the same about Richard Dean Anderson) are pale imitations of the originals. Guess television really is running out of original ideas.

I would be mad . There are to many tv shows going off the air.

Sad… to see Higgins leave. Was hoping Magnum & Higgins would go thru with the marriage! Please bring Higgins back.
Not liking the new cast that Magnum is dating!

Yes…please, more Magnum P.I. One of my fave shows! Please, end the series with Higgins and Magnum together! Fabulous shots of Hawaii. Thank you for the memories…maybe you guys could island hop next season? Like Kauai? The big island? It would add story line depth…well, dimension, anyway-
Thanx so much,
Gail k.

Magnum should get at least 3 more years. Be smart writers…keep the heart in it. Good drama and humor without the stupid international conspiracies and far fetched, dark world dominators! Remember, Higgins is pretty and smart, not a shrew.

I agree completely. I love Magnum and all the cast. I was kinda hoping they would go ahead and get married. The only time I actually watch series is on Friday night for Hawaii 50, Magnum and Blue Bloods. Hope that doesn’t get messed up.

Higgins is the
Main reason I love this show. As a suggestion, I would love to see some of the cast from Hawaii 50 as regulars on Magnum especially since 50 has left the air. Having some of the others could greatly expand the Msgnun story line too.