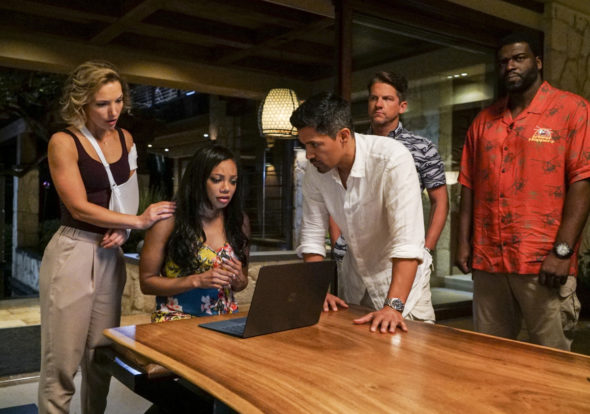 What do you think of the updated Thomas Magnum during the first season of the Magnum PI TV show on CBS? As we all know, the Nielsen ratings typically play a big role in determining whether a TV show like Magnum PI is cancelled or renewed for season two. Unfortunately, most of us do not live in Nielsen households. Because many viewers feel frustration when their viewing habits and opinions aren’t considered, we’d like to offer you the chance to rate all of the season one episodes of Magnum PI below.

A CBS detective drama, Magnum PI is an updated reboot of the 1980s Tom Selleck vehicle. The new action-adventure series stars Jay Hernandez, Perdita Weeks, Zachary Knighton, Stephen Hill, Tim Kang, and Amy Hill. It centers on former Navy SEAL Thomas Magnum (Hernandez), who is back from Afghanistan and working as a private investigator. Magnum lives in a guest cottage on the Robin’s Nest estate in Oahu, where he also serves as a security consultant. With his team at the ready, a vintage Ferrari at his disposal, and his trademark aviator sunglasses, Magnum is always ready to crack the next case.

What do you think? Which season one episodes of the Magnum PI TV series do you rate as wonderful, terrible, or somewhere between? Should CBS cancel or renew Magnum PI for a second season? Don’t forget to vote, and share your thoughts, below.

Please let everyone no maguam pi is a alsome show we love the acting and the actors.One season does not even give it a chance. They need to renew

The original was a favorite show that I never missed. Wasn’t expecting much from the remake.I was surprised and have enjoyed the new Magnum on its own merits, It has changed things up which is the only way it would ever have worked for people who were fans of the original. The new Magnum & female Higgins is a good change up as they would never have matched the original male Higgins/Magnum love hate relationship and that would have only left former Magnum fans disappointed. Well worth watching and entertaining in its own right.

Great show!! Loved the original and figured I would hate the remake but after the first show I was hooked!! Well done!

This is a show I can sit down with the family and enjoy. Even my husband will watch with me and he’s a sports fanatic. So please renew this show. We need more good feeling shows.

It is so nice to have a show on that the whole family can enjoy together. Just looking for an entertaining show. Everything doesn’t need to be gritty realism or social commentary.

Magnum is horrible cancel after season 2

I watch original didn’t even live that era young men now. I just don’t like new one only Hawaii five-0, Macgver copy same ones writer are really good are favorite shows. Should cancel please renewed MacGyver and Happy Together Damon Dwayne son so funny on before it.

Really enjoying the new Magnum. Jay Hernandez is doing a fantastic job. Very convincing in the role and adds just the right spin on the character. Hoping the series is renewed for another season. It’s a series with something for everyone.