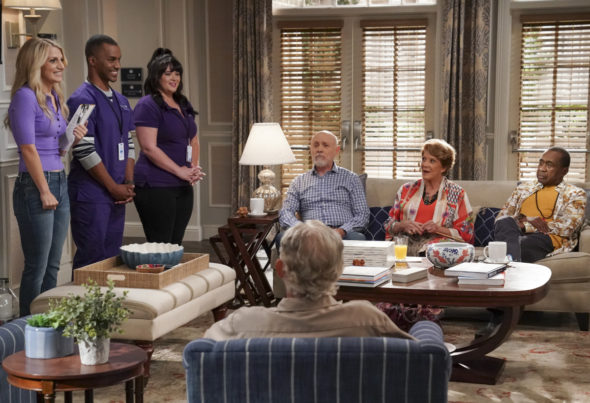 How will Drew and Gina’s relationship change in the second season of the B Positive TV show on CBS? As we all know, the Nielsen ratings typically play a big role in determining whether a TV show like B Positive is cancelled or renewed for season three. Unfortunately, most of us do not live in Nielsen households. Because many viewers feel frustrated when their viewing habits and opinions aren’t considered, we invite you to rate all of the second season episodes of B Positive here. * Status Update Below.

A CBS comedy series, the B Positive TV show stars Annaleigh Ashford, Thomas Middleditch, Kether Donohue, Sara Rue, Izzy G., Terrence Terrell, Linda Lavin, David Anthony Higgins, and Darryl Stephens with Hector Elizondo, Jane Seymour, Ben Vereen, Jim Beaver and Anna Maria Horsford recurring. The story begins with Drew (Middleditch), a therapist and newly divorced dad, who is in need of both a new kidney and a social life. He runs into Gina (Ashford), a rough-around-the-edges former high school acquaintance who volunteers one of her own kidneys. Together, Drew and Gina form an unlikely and life-affirming friendship. During the process, Gina discovers that the happiness she’d been seeking all along could be found in the form of giving. In season two, Gina inherits a surprise fortune from a patient at Valley Hills, the assisted living facility where she works, and this leads her to make a big change in a positive direction.

What do you think? Which season two episodes of the B Positive TV series do you rate as wonderful, terrible, or somewhere between? Do you think that B Positive should be cancelled or renewed for a third season on CBS? Don’t forget to vote, and share your thoughts, below.

I am extremely disappointed to hear that CBS is cancelling “United States of Al” AND “B Positive”! These two sitcoms are the ONLY newer sitcoms from ALL networks that I enjoy and ALWAYS watch!!! (The other one exception that I watch is “The Conners”.) Other than these, if I want to de-stress after a long day by watching a light-hearted comedy, I resort to watching re-runs of “Two and a Half Men”, “Mom” and “The Big Bang Theory”. I don’t think these two shows were promoted as they should have been. If I mention these two sitcoms to any of… Read more »

I loved this show and the only reason I looked forward to Thursday was because of b positive, so many people of all ages can relate in some way. I really miss it and the show you replaced it with is not something I was interested in although I tried but TBH I think you should bring back b positive! Please

Love the show. Was disappointed when Mom was cancelled. All my favorite shows end up being cancelled.

I love the show!! Please don’t cancel it.

Hope “B” Positive will be back! We look so forward to watching this show. Sure holds ones attention. Great story line and performers@

B positive is my new favourite sitcom. Love Drew, Gina and staff, they are all fantastic. So witty and full of funny and heartfelt content. Love! Love! Love! I laugh and cry it’s awesome.

I love this show. It should win an award for just the opening theme alone ! It’s great to see actors still performing as well as ever and Gina is a heart stopper. Watch out Drew. Hope it’s renewed for next season

I love this show. It’s nothing like many of the other half hour not funny at all comedies. It’s simply great viewing like a comedy should be. Just good honest fun. FIVE STARS

I look so forward to watching B Positive each Thursday. Great cast. Funny!

I love B Positive I find it funny and very clever. One of the best sit com’s
on T.V. next to Bob Ansola

B Positive is a uplifting show! It first I wasn’t sure of the show after episode 3 I was hooked! The great one liners and the way they are so caring too is great too! The only thing that gets me is the opening of show, it’s creepy.