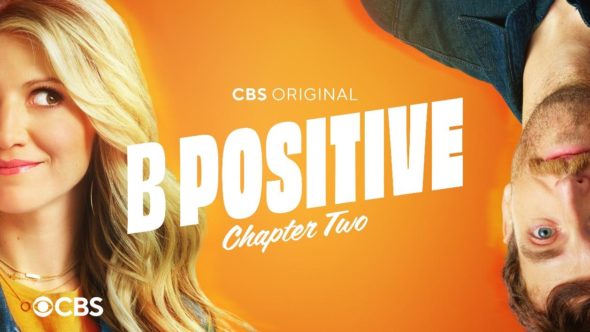 Once CBS sitcoms get established, they often have long runs. Just look at shows like Mom, The Big Bang Theory, and Young Sheldon. Can B Positive succeed where series like The Unicorn didn’t? Will B Positive be cancelled or renewed for season three? Stay tuned. *Status Update Below.

A comedy series, the B Positive TV show stars Annaleigh Ashford, Thomas Middleditch, Kether Donohue, Sara Rue, Izzy G., Terrence Terrell, Linda Lavin, David Anthony Higgins, and Darryl Stephens with Hector Elizondo, Jane Seymour, Ben Vereen, Jim Beaver and Anna Maria Horsford recurring. The story begins with Drew (Middleditch), a therapist and newly divorced dad, who is in need of both a new kidney and a social life. He runs into Gina (Ashford), a rough-around-the-edges former high school acquaintance who volunteers one of her own kidneys. Together, Drew and Gina form an unlikely and life-affirming friendship. During the process, Gina discovers that the happiness she’d been seeking all along could be found in the form of giving. In season two, Drew starts his new life with Gina’s healthy new kidney. Meanwhile, Gina inherits a surprise fortune from a patient at Valley Hills, the assisted living facility where she works, and this leads her to make a big change in a positive direction.

3/11 update: You can see the latest night’s ratings in context.

For comparisons: Season one of B Positive on CBS averaged a 0.56 rating in the 18-49 demographic and 4.66 million viewers in the live+same day ratings.

What do you think? Do you like the B Positive TV series on CBS? Should it be cancelled or renewed for a third season?

I love B Positive. Great character actors and a different premise from the usual sitcom. Nice to see a program not featuring only young, silly characters

Please bring back B Positive!!

This show improves with age. The leads are both very good and entertaining. Love the premise of the old folks home with so many good characters there.

I love B Positive. Please, please do not cancel it. It’s so very entertaining. And that bowling show you are looking to replace it with is so very boring. If there’s a change – I WON’T BE WATCHING!

I will not watch the bowling show YAK—-I loved B POSITIVE—-I CHUCK loved all the TV shows you produce loved loved MOM.