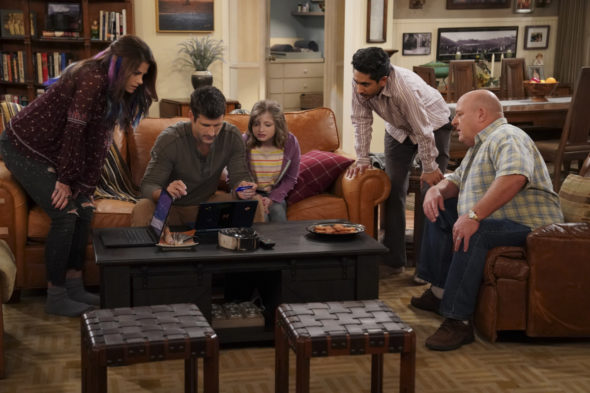 Will low ratings break up this friendship? Has the United States of Al TV show been cancelled or renewed for a third season on CBS? The television vulture is watching all the latest cancellation and renewal news, so this page is the place to track the status of United States of Al, season three. Bookmark it, or subscribe for the latest updates. Remember, the television vulture is watching your shows. Are you?

Airing on the CBS television network, the United States of Al TV show stars Adhir Kalyan, Parker Young, Elizabeth Alderfer, Dean Norris, Kelli Goss, and Farrah Mackenzie with Brian Thomas Smith, Rachel Bay Jones, and Azita Ghanizada recurring. The story revolves around the friendship between two men who’ve been through war together. Riley (Young) is a Marine combat veteran who is struggling to readjust to civilian life in Ohio. Awalmir aka “Al” (Kalyan) is the Interpreter who served with Riley’s unit in Afghanistan. After a long struggle to get him a visa to travel to the United States, Riley welcomes Al as he arrives to start a new life. They are supported by Art (Norris), Riley’s veteran father; Riley’s sister, Lizzie (Alderfer); Vanessa (Goss), Riley’s ex-wife; and Hazel (Mackenzie), Riley and Vanessa’s daughter.

The second season of United States of Al averaged a 0.47 rating in the 18-49 demographic and 4.92 million viewers in the live+same day ratings (includes all DVR playback through 3:00 AM). Compared to season one, that’s down by 6% in the demo and up by 5% in viewership in the live+same day ratings (including DVR playback through 3:00 AM). While these numbers don’t include further delayed or streaming viewing, they are a very good indicator of how a show is performing, especially when compared to others on the same channel. Though other economic factors are involved, the higher-rated shows usually get renewed and the lower-rated ones get cancelled. Find out how United States of Al stacks up against other CBS TV shows.

Will CBS cancel or renew United States of Al for season three? Despite following CBS’ top-rated sitcom, this show was only a middle-of-the-road performer for the network in its first year. The show’s been consistent this time around so I think that will be enough to land it a renewal. I’ll update this page with breaking developments. Subscribe for free alerts on United States of Al cancellation or renewal news.

What do you think? Were you hoping that the United States of Al TV show would be renewed for a third season? How do you feel that CBS cancelled this TV series, instead?

CBS you made a big mistake cancelling United States of Al. My husband was in the service and he cried when he watched some of the episodes. BIG MISTAKE CBS.

CBS Cancelled both Magnum PI and United States of Al. These were me and my wife’s favorite shows. I hope CBS can reconsider these cancellations.

What can be done to entice another network to pick this p? Such a great show, so disappointed

Very Very dissapointing…great show good actors but I’m sure liberal executives didn’t like a truth about the reality of life. If it wasn’t for Newest Hawaii 50 also canceled and Blue Bloods I wouldn’t even tune in and will do so less from now on.

This is our favorite sitcom. It handles some difficult content and brings some awareness to what life can be like for our veterans. I didn’t know much about the interpreters from Afghanistan and the show informed many about that as well. The show also has a sweetness to it.

I enjoy the show, and I appreciate that
it depicts Riley’s occasional struggle with PTSD. His emotions with his wife, Vanessa, are also from his issues. The rest of the cast also play their characters well. I hope this show will not be cancelled.

Great show. So down to earth. Love it!

It sucks so bad the earth doesn’t need gravity …

Really? If you don’t like it why say anything. Go find something that makes you joyful.