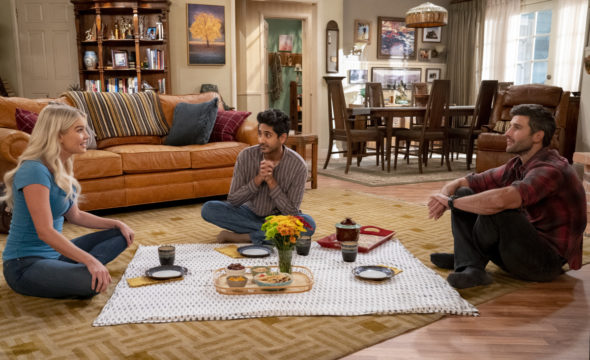 Will this friendship survive and thrive? Has the United States of Al TV show been cancelled or renewed for a second season on CBS? The television vulture is watching all the latest cancellation and renewal news, so this page is the place to track the status of United States of Al, season two. Bookmark it, or subscribe for the latest updates. Remember, the television vulture is watching your shows. Are you?

Airing on the CBS television network, the United States of Al comedy series stars Adhir Kalyan, Parker Young, Elizabeth Alderfer, Dean Norris, Kelli Goss, and Farrah Mackenzie. The story revolves around the friendship between two men who’ve been through war together. Riley (Young) is a Marine combat veteran who is struggling to readjust to civilian life in Ohio. Awalmir aka “Al” (Kalyan) is the Interpreter who served with Riley’s unit in Afghanistan. After a long struggle to get him a visa to travel to the United States, Riley welcomes Al as he arrives to start a new life.

Will CBS cancel or renew United States of Al for season two? This sitcom generated some very strong opinions before it even debuted (as did Mom and The Neighborhood) but the show is executive produced by Chuck Lorre. He has a great track record and all of his recent sitcoms have had long runs. The ratings aren’t great. I’m confident that either B Positive or United States of Al will be renewed by CBS but I doubt both will survive. I’ll update this page with breaking developments. Subscribe for free alerts on United States of Al cancellation or renewal news.

5/16/21 update: United States of Al has been renewed for a second season on CBS.

What do you think? Are you glad that the United States of Al TV show has been renewed for a second season? How would you feel if CBS had cancelled this TV series, instead?

Glad renewed. Could get heavy with them Times. Best of luck. Great cast. Tough task.

How will the writers deal with current events going forward? I understand Chuck Lorrie isn’t in the business of social awareness , but this story needs to be told just like it was in season one. Given the current situation I would understand if the Writers decided to call it a day. As a retired service member you all have my deepest respect and thank you for making me laugh at memories I thought I would never laugh about again. Well Done!!!

This show is so very important. It depicts the life of an American soldier with his many complex problems. It also gives us some insight into the life of an Afghannie person, who has worked ~~ FOR the Amercans~~and there are THOUSANDS OF THEM. THE PROMISES MADE TO THEM NEED TO BE KEPT BY OUR GOVERNMENT. This SHOW IS GREAT! Thanks!

I love this show. The main characters r great and the show has good storylines. So glad it is renewed

My husband and I really enjoy the show, even though it’s targeted a US audience, we’ve been enjoying it over in Europe as it gives little insight into 20 years of US and NATO presence and activities in Afghanistan. This makes it all the important now as after 2 decades, and trillions of dollars spent. It doesn’t seem as though NATO efforts fixed that much. We all pray that the newly equipped and trained security forces can hold out against the Taliban and if not, we should all be welcoming with open arms any refugees from the country.

I love the show really happy it’s been renewed my family of 9 love it!!

The program is really Bad!!! and that’s being polite!

This is an awesome sitcom

I wanted it to be good…I like the cast of the two leads. But it’s just a terrible show.

Very bad show…I watched the last two weeks because I thought it would be fun to watch a train wreck…but it wasn’t. Ugh.