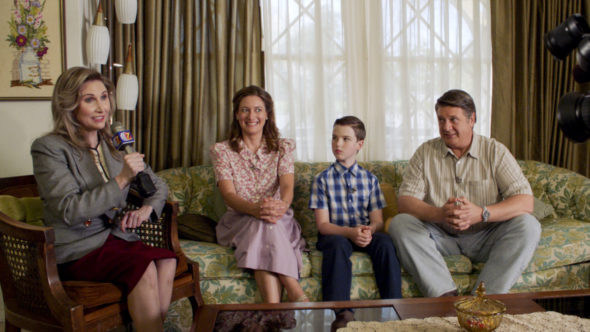 How will college adjust to Sheldon? Has the Young Sheldon TV show been cancelled or renewed for a fifth season on CBS? The television vulture is watching all the latest cancellation and renewal news, so this page is the place to track the status of Young Sheldon, season five. Bookmark it, or subscribe for the latest updates. Remember, the television vulture is watching your shows. Are you?

Airing on the CBS television network, Young Sheldon stars Iain Armitage, Zoe Perry, Lance Barber, Annie Potts, Montana Jordan, Raegan Revord, Matt Hobby, and Jim Parsons (narration). Recurring cast members include Wallace Shawn, Craig T. Nelson, Ryan Phuong, Wyatt McClure, Danielle Pinnock, and Rex Linn. Revolving around the early life of The Big Bang Theory’s Sheldon Cooper (Parsons), this comedy series follows a gifted and naive young Sheldon (Armitage) as he navigates his way through life while living with his very normal Texas family. Sheldon’s father, George (Barber), struggles to find his way as a high school football coach and as father to a boy he doesn’t understand. Sheldon’s mother, Mary (Perry), fiercely protects and nurtures her son in a town where he just doesn’t fit in. Sheldon’s older brother, Georgie (Jordan), does the best he can in high school. Sheldon’s twin sister, Missy (Revord), sometimes resents all the attention Sheldon gets, but also remains the one person who can reliably tell her brother the truth. Sheldon’s beloved Meemaw (Potts), his foul-mouthed, hard-drinking Texas grandmother, is very supportive of her grandson and his unique gifts.

The fourth season of Young Sheldon averaged a 0.76 rating in the 18-49 demographic and 7.22 million viewers. Compared to season three, that’s down by 27% in the demo and down by 17% in viewership. Find out how Young Sheldon stacks up against other CBS TV shows.

Will CBS cancel or renew Young Sheldon for season five? I have no doubt that this comedy series will be renewed and may possibly get another two-season order. I’ll update this page with breaking developments. Subscribe for free alerts on Young Sheldon cancellation or renewal news.

3/31/21 update: Young Sheldon has been renewed through season seven.

What do you think? Are you glad the Young Sheldon TV show has been renewed through a seventh season? How would you feel if CBS cancelled this TV series, instead?

The show has humor, insights into various levels of growing up and adulthood, and a good message. We need more shows like this instead of people getting shot and knifed and bludgeoned. Most of us think that this country has gotten entirely too violent. Just look at the TV shows and see the example that they are given which is a negative example. Keep Young Sheldon!

Love watching each week. Makes me laugh every week.

Please renew and continue Young Sheldon! Only good show these days that puts a smile on all our faces!!