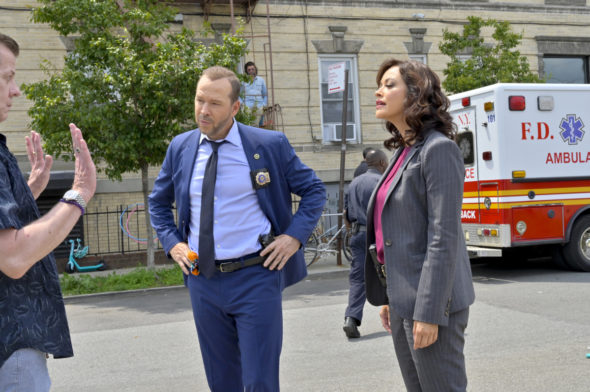 Are tough times ahead for the Reagans in the 12th season of the Blue Bloods TV show on CBS? As we all know, the Nielsen ratings typically play a big role in determining whether a TV show like Blue Bloods is cancelled or renewed for season 13. Unfortunately, most of us do not live in Nielsen households. Because many viewers feel frustrated when their viewing habits and opinions aren’t considered, we invite you to rate all of the 12th season episodes of Blue Bloods here.  *Status Update Below.

What do you think? Which season 12 episodes of the Blue Bloods TV series do you rate as wonderful, terrible, or somewhere between? Do you think that Blue Bloods should be cancelled or renewed for a 13th season on CBS? Don’t forget to vote, and share your thoughts, below.

Really like this show. Danny and Baez should get married and adopt that baby together

FANTASTIC FANTASTIC !!!!!!! That pretty much says it all A very good and interesting end to season 12 and am so much looking forward to season 13. I just love it how Frank was putting Crawford in her place as she is a trouble maker Glad to see Erin running for DA and hope she gives Crawford a good fight. Will be interesting! Hope to see Nickie and Jack come home for visit if they can. Also good to see the prayers again before family dinner and hope that Erin keeps Anthony with her if she becomes DA. just can’t… Read more »

Love this show. I’ve been watching Tom Selleck since he started. My one and truly best actors

Thank you Thank you for season 13!!!!! Awesome Love this show and last night 4/29 was really good as always. Such great family intervention and how they face their problems head on. Just Fantastic as alwayss. Can’t wait to see season 13 as it will be spectacular. Love you guys!

Thank you for season 13

This one of the greatest shows ever. Please, please never cancel the fantastic show. I even watch the reruns during the day. Never missed an episode. The cast is also great.