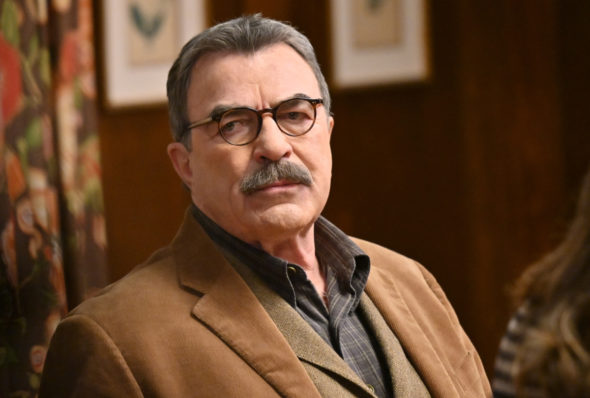 Members of the Reagan family will continue to protect and to serve in the 2021-22 television season. CBS has renewed the Blue Bloods TV series for a 12th year.

A police family drama, Blue Bloods stars Tom Selleck, Donnie Wahlberg, Bridget Moynahan, Will Estes, Len Cariou, Marisa Ramirez, Vanessa Ray, and Sami Gayle with Whoopi Goldberg, Will Hochman, Eric B., Abigail Hawk, Gregory Jbara, Robert Clohessy, Steven Schirripa, Andrew Terraciano, and Lauren Patten in recurring roles. The show revolves around the Reagans, a multi-generational family of New York City cops that are dedicated to law enforcement. Patriarch Frank Reagan (Selleck) is the New York Police Commissioner and runs his department as diplomatically as he runs his family. His unapologetically bold father, Henry (Cariou), previously served a stint as Chief. A source of pride and concern for Frank is his eldest son, Danny (Wahlberg), a seasoned detective, family man, and Iraq War vet. Danny sometimes uses dubious tactics to solve cases with his partner, Detective Maria Baez (Ramirez). Frank’s daughter, Erin (Moynahan), is a New York Assistant District Attorney who is also a single parent to her daughter Nicky (Gayle). Frank’s youngest is Jamie (Estes), a Harvard Law graduate and the family’s “golden boy.” He passed on a lucrative future in law and follows in the family footsteps as a cop. Eddie Janko (Ray) is Jamie’s wife and a fellow officer.

Airing on Friday nights, the 11th season of Blue Bloods averages a 0.53 rating in the 18-49 demographic and 6.43 million viewers in the live+same day ratings. Compared to season 10, that’s down by 19% in the demo and down by 16% in viewership. In the traditional ratings, the show ranks 13th out of this season’s 24 scripted CBS series in the demo but is fifth in overall viewers.

What do you think? Are you a regular viewer of the Blue Bloods TV show on CBS? Will you be watching season 12?

Cannot wait for season 12 to start here in the UK, I just hope season 13 is being prepared. Blue Bloods is waiting in for because it seems to be real life. My wife and I have seen every episode. Thanks to all of the cast, We’ll Done.

Can’t wait for the start of season 12. Love this show and never miss a one.

Can’t wait for season 12 to start. Love the show and never miss it. I even watch the reruns

Never miss a show and watch reruns to. Love the show and Tom Selleck is GREAT. So glad there will be a season 12. All of the Reagan’s are really good also. GREAT SERIES . Love it….

LOVE Bluebloods !! The one show I never miss. Love it so much I always buy the entire season on DVD as soon as it is released. Great cast, great storylines. Just the best.

So happy blue bloods is being renewed for another season. I love Frank!!

LOVE Blue Bloods…! Very happy it’s renewed…..I feel like they’re family….one I respect and love. All of the characters are unique in their own way, but they always come together as……family. (Hope Erin and Jack really get back together! )

I LOVE this show so much ! I watch all of the re-runs over and over. I can’t get enough of this show. I am thrilled that it has been renewed.

Keep Blue Bloods alive! My Friday night with the Reagans!

We enjoy watching Blue Bloods. Please renew for another season

Fun also to see the kids grow and mature in the series. Let’s hope for another season

Wonderful show with super actors. KEEP IT GOING, PLEASE. Sure it has crime in it. It is a cop show, but more importantly it IS a family show!!!!!

We are delighted that Blue Bloods is coming back.

Love the show. So happy to know it is coming back for a 12th season.