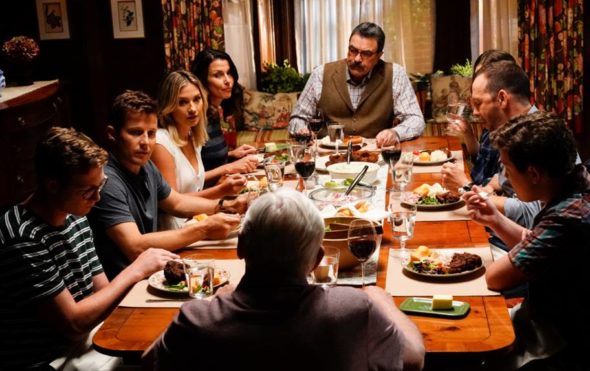 Do viewers want to keep joining the Reagans for their family dinners in the 10th season of the Blue Bloods TV show on CBS? As we all know, the Nielsen ratings typically play a big role in determining whether a TV show like Blue Bloods is cancelled or renewed for season 11. Unfortunately, most of us do not live in Nielsen households. Because many viewers feel frustration when their viewing habits and opinions aren’t considered, we invite you to rate all of the 10th season episodes of Blue Bloods here. *Status update below.

A CBS police family drama series, Blue Bloods stars Tom Selleck, Donnie Wahlberg, Bridget Moynahan, Will Estes, Len Cariou, Marisa Ramirez, Sami Gayle, and Vanessa Ray. The show revolves around the Reagans, a multi-generational family of cops that’s dedicated to New York City law enforcement. Patriarch Frank Reagan (Selleck) is the New York Police Commissioner and runs his department as diplomatically as he runs his family. His unapologetically bold father, Henry (Cariou), previously served a stint as Chief. A source of pride and concern for Frank is his eldest son, Danny (Wahlberg), a seasoned detective, family man and Iraq War vet. Danny sometimes uses dubious tactics to solve cases with his partner, Detective Maria Baez (Ramirez). Frank’s daughter, Erin (Moynahan), is a New York Assistant D.A. who is also a single parent to her teenage daughter, Nicky (Gayle). Frank’s youngest is Jamie (Estes), a Harvard Law graduate and the family’s “golden boy.” He passed on a lucrative future in law and follows in the family footsteps as a cop. Eddie Janko (Ray), Jamie’s female partner and eventual wife, keeps him on his toes.

What do you think? Which season 10 episodes of the Blue Bloods TV series do you rate as wonderful, terrible, or somewhere between? Do you think that Blue Bloods on CBS should be cancelled or renewed for an 11th season? Don’t forget to vote, and share your thoughts, below.

Blue Bloods is our very favouriteprogramme on television . If we can express a suggestion or two: We would like Danny to have a love interest. As well, Erin and her X are a wonderful pair. You should Have Jack grow up and give himself to Erin for good. Also, we would love to see James and Eddie have a baby. We hope that the newly discovered Joe (Joe’s son) have a continued role in the programme. Also, what about Frank, he should discover a real woman to love(forget the one night stands). Keep the Pop”s role. He is great!

I’m very pleased to see Blue Blood is still on the schedule.
I read it was canceled and I was very unhappy about that rumor.
Politics should not be an issue in our Television programing choices when it comes to our entertainment.
Entertainment should be for the public to determine its fait.

A wonderful show that you can watch as a family. Always positive with values that you would like to share with your own family. Wish there were more shows like this one.

Please renew Blue Bloods season 11,12 and 13 at least so we don’t have this suspense every year. Blue Bloods is the best tv show on. It’s like we grew up in the 40’s and 50’s family dinners, respect for each other and laws, teaching our children love and respect plus responsibility. THE BEST!

My family looks forward to Blue Bloods each week. We have not missed one show.
We hope Tom Selleck is able to return. If he cannot return or doesn’t want to return we think the show can continue a great story line. We love the show!
**********

Why isnt the other grandparents ever involved with the family? Frank’s wife’s parents.