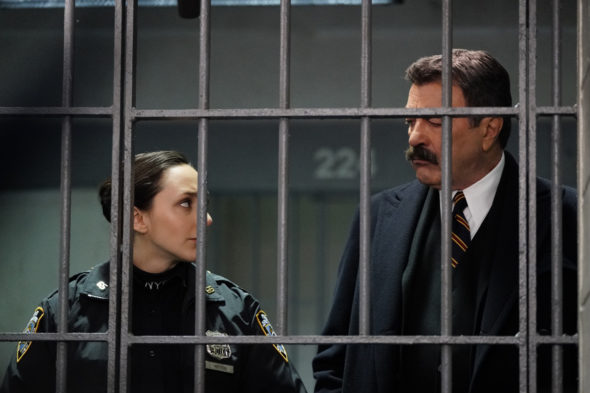 The Tiffany network is sticking with the Reagan family. CBS has renewed its Blood Bloods TV show for a ninth season. Although the police procedural has fallen in the ratings and has never been a strong performer in the coveted 18-49 year old viewer demo, it always draws a large total audience, even on Friday nights, when viewership tends to dip.

Blue Bloods: A Look at the Ratings

The eighth season of Blue Bloods is averaging a 0.92 rating in the 18-49 demographic and 9.21 million viewers. Compared to season seven, that’s down by 26% and down by 12%, respectively. Thanks to its poor performance in the demo, Blue Bloods ranks 18th out of the 25 scripted CBS TV shows we’re tracking. However, when we sort by average total viewership, it rises to fifth place.

What do you think? Do you still enjoy the Blue Bloods TV series? Did you think CBS would cancel or renew it for season nine? Let us know, below.

Blue Bloods Greys Anatomy and Madame Secretary Scandal Designated Survivor are some of my favorites I look forward to every time they come out with a new seasom. Since I’m sick in bed it’s my only source of entertainment but if I could onl watch a few these would definitely make my list. Orange is the new black was good but the last season was horrible. As far as a foreign series Kon Kon Kon is one of the most uplifting and inspirational shows I have seen in a long time. Worlds most extraordinary homes is my favorite show on… Read more »

We enjoy all the shows listed on CBS line up that we have them recorded in case we are not where we can watch. Please leave all the NCIS shows on, Blue Bloods, Hawaii 5-0, etc.

Please leave Blue Blood on the air, that is the best show ever.

On of the best shows love blue bloods.

This is my favorite network TV show. It reminds me of how shows were when I grew up . They have family values , good guy vs bad guy and manage to show current on going social issues. As a police officer son it’s nice to see a show that puts out in front of the American public the massive sacrifice those who choose to serve their community as police officers make on a daily basis. Not just them but their families as well. They do it all while really entertaining us. Hope it runs another 9 seasons

One of my favority shows. Excellent

I wish they would allow Linda to somehow come back pretend like one of Danny’s stalkers has had her captains his whole time . And to make her murder look like she was killed

Love the idea too.

Love Blue Bloods. My husband and I never miss the Friday airing. Love the family dinners think it encourages people to have own family dinners.

I’ve enjoyed the show, but disappointed that none of the stars are connected with anyone, physically — one grandfather, one father, 2 sons, 1 daughter, 1 granddaughter and 2 grandsons. Really?

I love the show Blue Bloods. I don’t even remember how long I’ve been watching it. It’s been at least 8 years. I never miss the Thursday all day shows, try to catch the Friday night show and look for it sometimes during the day if I’m home. I’m interested in the whole family being in law enforcement and I especially like the family dinners. I’m very happy that they were renewed.