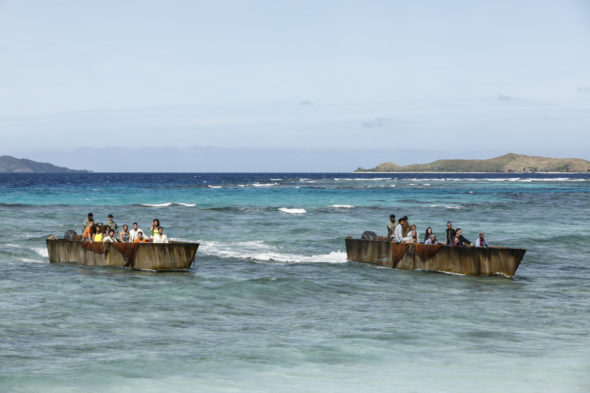 Guess which reality TV series is still among the fittest? CBS has renewed its long-running Survivor TV show for a 37th season (presumably for Fall 2018). Although it premiered in May of 2000, even after all these years, it remains a winner in the Nielsen race and scores better in the demo than even most scripted programming on the Tiffany Network.

A CBS reality competition, Survivor is hosted by Jeff Probst. Airing two cycles per broadcast network season, typically two or three tribes of contestants compete each against one another, in an effort to outwit, outplay, and outlast each other. In the end, only one person can be the “sole survivor” and the winner of the game.

Survivor: A Look at the Ratings

The most recent fall season averaged a 1.67 rating in the 18-49 demographic with 8.10 million viewers. Compared to the Fall 2016 season, that’s down just 7% in the demo and down by 3% in viewers. The current spring season is doing a bit better, averaging a 1.69 in the demo with 8.27 million. That’s down by 1% and up by 4%, respectively. Survivor continues to be CBS’ highest-rated unscripted series in the demo and is only bested by 60 Minutes in viewers.

What do you think? Are you still watching the Survivor TV series? Do you think CBS will keep renewing it, until it really tanks, or will they retire the format for a while and then bring it back?

I also am quite Disgusted at seeing Survivor stoop so low as other shows I Never watch because of the unnecessary eating of all those insects. It was disgusting to watch, not entertaining at All. Surely other challenges can be thought of as usual. I sincerely hope this is not going to become a trend. If it does, I’ll be very interested to see how many other viewers feel the same way as I do.

I have watched every survivor show from the ever start..and LOVE IT..
The end of the Ghost Is. show was the worst ever…..
How could they allow ONE person to decide who wins ??????
And it was the LOOSER that got to make that decision….. A LOOSER……
The show now has taken a giant step backward…..
They could have — made fire,…. pick rocks… solve a puzzle … throw something through a hoop…… anything at all..but don’t have the looser pick the winner….

I feel the same ed. was so disappointed in what happened. have been watching since richard hatch. if this happens in the fall this show might be done for me. I was never so disappointed in letting 1 person pick the winner. I knew as soon as jeff said she would pick I knew who won this just was not fair. they should of split the money

I love survivor and do not miss any episode!

What about giving criminal minds another season??