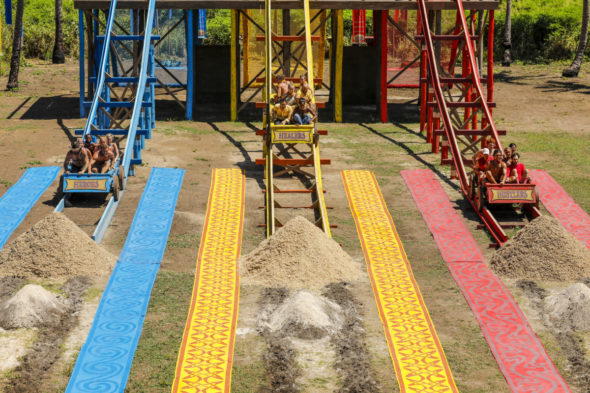 Is this reality TV series still fit enough to survive? Is the Survivor TV show cancelled or renewed for a 36th season on CBS? The television vulture is watching all the latest TV cancellation and renewal news, so this is the place to track the status of Survivor season 36. Bookmark it, or subscribe for the latest updates. Remember, the television vulture is watching your shows. Are you?

A competitive reality show airing on the CBS television network, Survivor is hosted by Jeff Probst. Season 35, Survivor: Heroes vs Healers vs Hustlers, pits three tribes of six contestants each against one another, in an effort to outwit, outplay, and outlast each other. Heroes (Levu Tribe) are used to being heralded for their achievements. Healers (Soko Tribe) receive gratitude for their work. Hustlers (Yawa Tribe) must earn respect from others.

Despite its inevitable slide over the seasons, Survivor is still a formable force, so I don’t expect a cancellation, unless things go sharply south, really fast. However, rumor has it the 36th cycle is already in the works. Still, I’ll keep an eye on the Nielsens and update this page with any breaking developments. Subscribe now, for free updates on and Survivor cancellation or renewal news.

12/1 update: CBS has confirmed Survivor is renewed for season 36, which will premiere on February 28, 2018. Details here.


What do you think? Should CBS cancel or renew its Survivor TV show for season 36? How much longer do you think this competitive reality TV series will last?